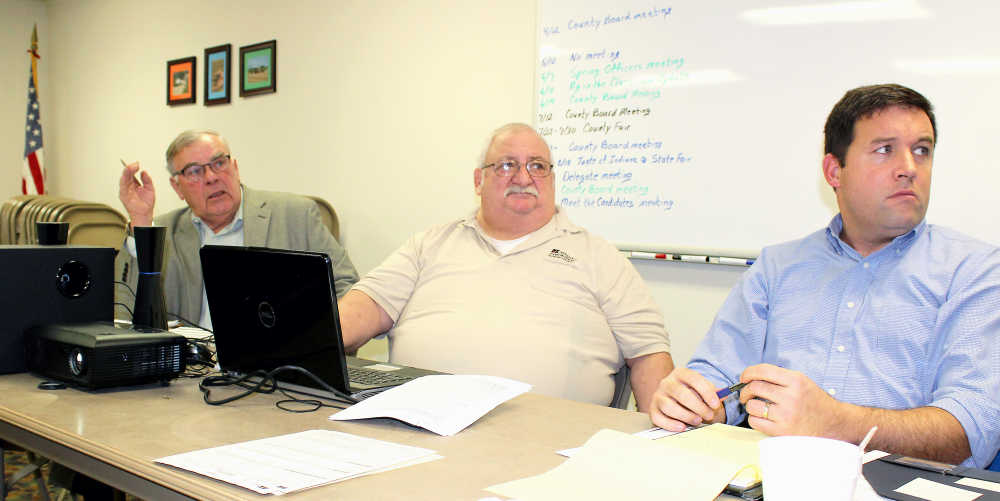 The governor’s proposal to bump the Indiana state gasoline tax by 10 cents captured much of the attention and set most of the tongues wagging after Gov. Eric Holcomb’s first State of the State address last week.

But to hear the legislators representing Putnam County tell it, you ain’t seen nuthin’ yet ...

The ways and means of improving Indiana’s poorly rated roads and bridges is expected to be “a huge issue,” Crane said, indicating that Gov. Holcomb has put it this way: He’s “considering a menu of options.”

Besides the 10-cent gasoline tax hike, he also proposed a $15 annual vehicle fee and a $150 annual charge for electric vehicles (which still use the roadways but purchase little if any gasoline).

While Gov. Holcomb reasons that asking Hoosiers to invest a little more to meet a need, the end result will be worth it, count Sen. Crane among those who haven’t made up their minds as far as the proposed gasoline tax hike goes.

“I’m uncomfortable with the concept, coming from a conservative standpoint,” he offered Saturday.

Town hall meetings are coming up around the state to discuss the proposal, Cash said, adding that he doesn’t expect Hoosiers from bigger cities to support it.

“Those people from the cities have probably never seen a gravel road in their lives,” Cash said.

District 44 State Rep. Jim Baird (R-Greencastle), beginning his fourth two-year term in the Indiana House, reminded the 30 persons in the room that last year Putnam County with more than $1 million and the City of Greencastle with more than $600,000 received a boost in roads and bridge funding from the state FIRST (Funding Indiana Roads and Bridges for a Safer Tomorrow) Program.

“I have another thing I’d like you to keep in mind about roads and bridges,” Baird said Saturday.

“One thing that caught my eye,” he continued, is that the study suggests that the average Hoosier spends $491 per year on repairs to their vehicles, often as a result of potholes tearing up tires and shocks.

“The study suggests,” Baird said, “that $50 a year (per vehicle) could support having sustainable roads and bridges within our state.”

Another road-related issue that has been floated for a second straight year is the possibility of making interstates through Indiana, including I-70, into toll roads.

That wouldn’t necessarily sit well with local residents, it was suggested. Anticipated additional wear and tear on local roads and highways like U.S. 40 and 36 could be expected from motorists likely using alternate routes to avoid having to pay a toll.

Rep. Baird said not to worry.

“That was part of the initial discussion,” he said, but the latest bill does not include the toll road idea.

That notion has been put on hold, he said, until “we can get some experts in and have a discussion.”

Meanwhile, with 1,500 to 1,600 bills already filed in both chambers, the start of the 2017 Indiana General Assembly has seemed like a ”tsunami of information coming at you,” Sen. Crane said.

“My focus right now,” the freshman legislator said, “is on the Senate bills that have been field. There’s been hundreds of them.”

That number is 571 to be exact, moderator Cash interjected.

Baird, meanwhile, pointed to the priorities that await his attention, listing five major issues on a informational sheet he passed out:

-- Strengthening a commitment to educators and students.

-- Focusing on attracting, retaining and improving the workforce.

District 37 State Sen. Rodric Bray (R-Martinsville) was unable to attend the session’s initial one-hour, 20-minute Legislative Update program due to a commitment elsewhere in the district.

The next scheduled program is set for 8 a.m. Saturday, Feb. 18 at the Farm Bureau Insurance Office on North Jackson Street in Greencastle.