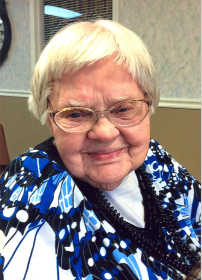 Born Feb. 15, 1915 in Crown Point, the daughter of Wells and Helen (Woodcock) Ainsworth. She was a 1933 graduate of Greencastle High School.

Kathryn retired from P.R. Mallorys in 1983, where she had worked for 17-1/2 years. She had previously worked at the Angwell Curtain Factory for 12-1/2 years. She had been a volunteer at the Putnam County Senior Center for 28 years.

She was a member of the Bainbridge United Methodist, Bible school and UMW; member of RSVP and its senior volunteer program; AARP; Putnam County Council on Aging; Area 7, Terre Haute; West Central programs on Aging; and council treasurer for grand guardian council of Jobs Daughters.

She had the honor of receiving the Outstanding Service to the Community Award, Older Hoosier of the Year, RSVP Ameritech Volunteer of the Year and nominated Snow Queen.

She married Glenn Thompson on Sept. 22, 1934 and he preceded her in death in 1981. She was also preceded in death by her son & daughter-in-law, Larry & Karen Thompson and her parents and siblings.

Funeral services will take place at 1 p.m. on Saturday, March 11 at Hopkins-Rector Funeral Home, Greencastle. Interment will follow at the Forest Hill Cemetery.

Memorial contributions may be made in Kathryn’s memory to the Bainbridge United Methodist Church or the Putnam County Senior Center.