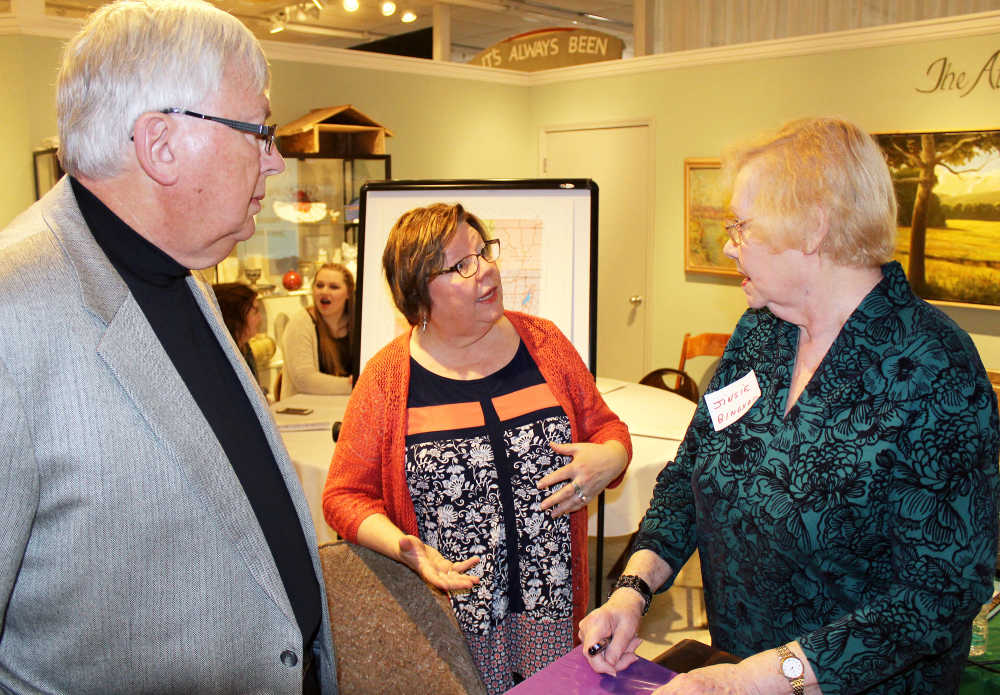 Banner Graphic/ERIC BERNSEE Putnam County Museum Director Lisa Mock (center) and board President Warren Macy chat with guest speaker Jinsie Bingham who spoke on “Putnam County: Believe It or Not” at the 15th annual membership meeting of the museum.

Unofficial local historian Jinsie Bingham took Putnam County Museum members on a tour of the county’s 13 townships without ever leaving the building during the museum’s 15th annual membership meeting this week.

Titling her presentation “Putnam County: Believe It or Not,” Bingham offered tales of crime, passion and whimsy as she detailed people and events from each of the county’s townships (with the exception of Greencastle Township).

She spoke of three long-ago murders and the “recognition of some important people from Putnam County that many may have forgotten.”

An emeritus board member of the museum, the 81-year-old Bingham, who has spent virtually her entire life in Greencastle, began her sentimental journey by noting that Washington Township is the only township still named as it was originally. The Russell and Clinton townships area, she noted, was once named Parke Township, while Tipton Township was another.

She spoke of a twin bridge to the Big Four Arch Bridge west of Greencastle near the confluence of the Big Walnut and Little Walnut creeks.

“And don’t you ever call it ‘the Four Arches,’” Bingham urged, referring to the misnomer that persists locally for the historic railroad overpass.

The Big Four, of course, was the railroad that served Cleveland, Cincinnati, Chicago and St. Louis.

Township by township, some of the highlights from Bingham’s lengthy presentation included:

Jackson Township -- Most famous for Dr. Robert Long, who went on to become an Indianapolis physician and later opened the Robert Long Hospital at Indy.

Franklin Township -- Was the slowest to settle, Bingham said, noting it “was dominated by Chief Cornstalk” but Roachdale eventually evolved with the coming of the B&O and Monon railroads.

Russell Township -- Although the smallest township now in population, it was once the home of Harmonia Academy, a three-story college building with an enrollment of 250 at one time.

Clinton Township -- Its beautiful Clinton Falls area, Bingham said, was named by a traveling salesman. Prior to that, people called the area Quincy or Booneville.

Monroe Township -- It was settled by transplants from Kentucky, she said, listing families such as the Lanes, Judys, O’Hairs and more whose birthplace was Somerset, Ky. That explains the area known as Somerset where the Somerset Christian Church stood until it was ravaged by fire. The first regulation basketball court in Putnam County was also the home of the Bainbridge Pointers.

Floyd Township -- Its first resident, Joseph Warford, has a creek named after him. Meanwhile, surprisingly, the 1860 Census shows Groveland with a population of 1,440 people.

Marion Township -- Ruben Ragan was the first permanent settler and the first town was Mount Meridian. Thomas Jefferson Jackson, who lived to be 100, was the first person to be married in Putnam County when he wed Nancy Wood in 1822.

Madison Township -- Home to Fern Cliff, now a nature preserve, where “they grew things not found in other places,” Bingham said. But the town folded when the railroad ceased going through. Also part of the area was the 160-acre Chapman Glass Co., which hauled out 20,000 tons of sandstone annually to provide the green coloring for the Coca-Cola bottles of the past.

Jefferson Township -- Was home to Carthage, often called “Cat,” which was renamed Mount Meridian after the post office refused to allow Carthage because another town was so named. Broad Park, meanwhile, was named for J.C. Broadstreet and Hugh Parker, she said. Another interesting township footnote, Bingham said, is that the logs from the old Halfway House at Mount Meridian were reused to create the Greencastle log building that was long the Holly Shop and is now occupied by the Mona Lisa Spa.

Cloverdale Township -- Louie Morrison had the first car dealership in all of Putnam County, which later morphed into the King Morrison dealership in Greencastle.

Warren and Washington townships “just ooze history,” Bingham said, noting that they are the only two townships in which the old National Road went all the way through them.

Warren Township -- Home to the Deer Creek Cemetery, which Bingham said boasts a headstone with the date Feb. 30, 1849. Yes, we said Feb. 30.

So that’s Putnam Coutny, believe it or not.