Cloverdale, Northeastern to do battle in round two 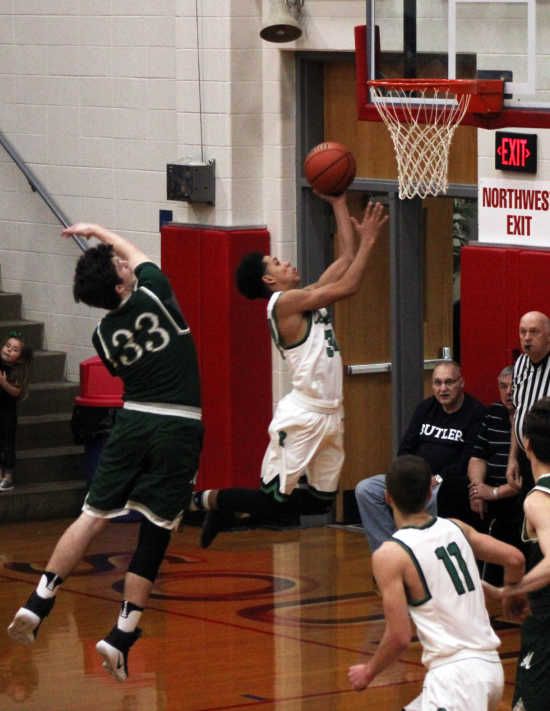 Jalen Moore of Cloverdale makes a layup in the sectional championship game against Monrovia. He and the Clovers will battle Northeastern at 10 a.m. on Saturday in the Greenfifeld-Central Regional.
Banner Graphic/Joey Bennett

Not only do both teams like to get up and down the court and score points, but between them they have made five regional appearances over the last three years without either bringing home the title.

Each team is led by a college-bound senior standout ranking among the state’s top nine scorers, and for those players time is running out.

Cloverdale’s Cooper Neese is the seventh-leading scorer in state history and is headed to Butler next year.

Neese has fallen off to third place in the season scoring totals, while Northeastern’s Tyler Smith ranks ninth and will be playing collegiately at Division II Florida Southern.

Northeastern coach Brent Ross is well aware of the star potential on hand for Saturday’s game.

“You’re looking at two kids who are probably going to be on the Indiana All-Star team who are just relentless competitors and have become friends,” Ross said. “They have both gone to the regional more than once and not won it. I’m sure coach [Patrick] Rady is also worried about that situation.“

Ross admits it will be tough to see either Smith or Neese end his career in this game.

“Neither of them wants to go home,” he said. “For both coaches, there have to be some nerves going on in that area.”

Rady can see a mental difference in Northeastern’s team compared to last year.

“They are definitely locked in,” he said. “It’s going to be an outstanding game. I know last year they felt they should have won it, and they lost [to Indianapolis Howe] at the buzzer.

“They have aspirations of winning the state, just like we do.”

Rady knows the Knights are good in transition.

Smith is hardly the only scoring threat for the Knights.

“He lit us up last year in the regional,” Cloverdale junior guard JalenMoore noted. “He came out and hit two or three threes in a row, so we need to get a hand up and don’t overextend on our defense.”

Moore says the addition of assistant coaches Karl Turk and Brian Gerard has helped the team to improve defensively.

“We are a lot better defensively and in rebounding than last year,” he said. “I wasn’t really nervous the last two years, I just need to play my game. If they go on a run, we can’t get all out of our head and keep playing our game.”

Ross can see an improvement in the Clovers on the defensive end.

“They are much better defensively,” he said. “They are much stronger, and their kids are more mature. Coach Rady has done a great job of beefing up their schedule.”

Ross said the game that showed Cloverdale’s strength was the Danville game, the only loss for the Clovers since Dec. 26.

“That game on film showed me just how quick both Neese and Moore are,” he said. “We’re going to have to be able to stay in front of those two guys. We’d like to try to hold them under 40 if we can, which is going to be very, very hard to do.

“They are two very unique players who can do a lot of things,” he added. “They are not easy to deal with.”

Another factor Ross sees is an improved level of strength in the Clovesr.

“Their physicality is better,” he added. “Last year, I thought we could muscle them up a little bit. I’m not sure we can do that this year.”

Rady will be coaching in his third straight regional, the second as head coach, and has learned some things during that time he hopes can help.

“We are trying to get the distractions out early in the week,” he said. “We hosted a media day on Tuesday, and wanted to get T-shirt sales going for our fans. We want the community to be involved, but we want to get those things taken care of early in the week to be able to have some good practices on Wednesday, Thursday and Friday.”

“It’s a different kind of week with the potential of two games on Saturday,” Rady added. “We are definitely focused on Northeastern, but we have assistants putting things together for the other two teams [Shenandoah and Heritage Christian] should we advance to the championship game.”

Rady also sees a different mentality in his team this year compared to last season entering the regional.

“During the season, if we play on both Friday and Saturday we try to give them Monday off from practice,” he said. “Cooper and Jalen said ‘no,’ that everybody wanted to practice. I’ve definitely seen more urgency on the defensive end this year than last year.

“The kids have also been doing a better job of paying attention to personnel and listening to our game plan better.”

Rady’s team will be traveling to Hancock County today and will practice this evening at the tourney site.

Ross notes that his team is taking a different approach.

“We are not going to go over there and practice,” said Ross, whose school is near the Ohio border about 20 miles north of Richmond. “We are going to look at it like any other road game, like we did last year.”

Media coverage: The game will be broadcast on WREB-FM 94.3 and streamed online at mtcsports.net.

Both teams closed out the regular season strongly, with the Clovers winning 13 of their last 14 – only losing to Class 3A Danville. The Knights have gone 13-2 since Christmas break, losing only to Class 4A powers Pendleton Heights and Connersville.

Up next: The winner will play at 8 p.m. for the regional championship against the survivor of the other regional game between Shenandoah (20-4) and Heritage Christian (15-9).