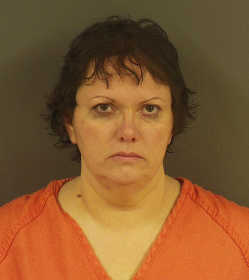 The former treasurer of the Madison Township Volunteer Fire Department was arrested Friday night on four counts related to alleged thefts totaling more than $80,000 from the department.

Dickerson faces two counts each of theft and official misconduct.

In November, Indiana State Police were contacted by members of the Madison Township Volunteer Fire Department (MTVFD) about potential missing funds from the department's bank accounts.

A subsequent investigation revealed that on several occasions in years 2014-16, Dickerson in her position as treasurer, allegedly utilized MTVFD funds totaling an estimated $80,216.72 for personal use, such as cash withdrawals, paying personal bills and purchases at local retail stores.

The investigation began to unfold when fire department officials asked Dickerson for the checkbook and discovered the check ledger had been torn out.

Informed that department money was missing, Dickerson reportedly told fire officials "I intended on paying it back" or "words to that effect," the probable cause affidavit noted.

The case was investigated by State Police Det. Brian Maudlin, who discovered six checks written to Duke Energy, another key element of the case. The MTVFD firehouse is serviced by Parke County REMC, so there is no reason checks should have been written to Duke.

Following an afternoon attempt by Indiana State troopers and Greencastle Police officers to serve the warrant, GPD officers finally spotted her at her East Side residence and took her into custody.

Because some of the allegations date before July 1, 2014, the charges are actually filed under the state's old and new felony systems.

In the former scheme, she faces a pair of Class D felonies, one for theft and one for official misconduct. Class D felonies are punishable by six months to three years in prison.