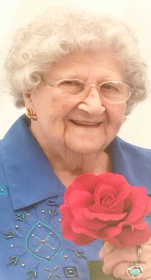 After graduating from high school in 1940, she married Burley Forrest Allgood Sr. Burley passed away in 1984.

Beulah worked as a cook for many years. She also was a caregiver for many people. She enjoyed making cinnamon rolls and delivering them each week for her special friends. Beulah had a fantastic touch at decorating, and adding personal touches to everything.

She was a member of the Eastern Star, Ladies Aid, Heavenly Sunshine, Russellville Community Church and was a founder of Browns Valley Baptist Church.

She was preceded in death by her parents, husband and siblings John Grimes, Randall Grimes, David Grimes, Freda Wiatt and Katie Kelly.

Friends may visit with the family from 1-3 p.m. Tuesday before the service at the funeral home.