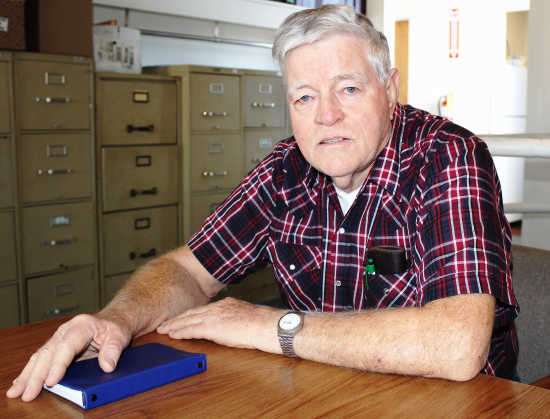 Dale Cantonwine is about to go on dialysis unless he can find a donor for a kidney transplant.
Banner Graphic/ERIC BERNSEE

Lifelong Putnam County resident Dale Cantonwine isn't just a master gardener, he's a master grower. He could grow tomatoes in the cracks of the sidewalk. He could grow cover crops on a parking lot. Heck, he could grow sunflowers on the moon.

But what he can't grow -- not even with all the Miracle-Gro in the world -- is a new kidney. And Cantonwine desperately needs one of those to prolong his life and maintain his quality of living.

The 69-year-old Cantonwine, who lives with wife Velvet three miles west of Brick Chapel in Clinton Township where he has resided since 1954, has been on the kidney transplant list for a little more than a year.

The average wait there, his doctor, Dr. Tim Taber, medical director of the IU Kidney Transplants Program, said, is 4-6 years to receive the kidney of a deceased person. Sadly, many patients who must go on dialysis while they wait ultimately end up ineligible for the transplant, Dr. Taber noted.

That's why Cantonwine is now looking for and hoping to find a living donor.

"The majority of people don't even know I have kidney trouble," Cantonwine told the Banner Graphic.

And now he's getting dangerously close to needing to go on dialysis in order to purify his blood as a substitute for normal kidney function. In fact, he's down to 13 or 14 percent kidney function, Cantonwine said.

"I'd like to find a living donor before going on dialysis so I wouldn't have to do that," he said.

A living donor, he stressed, "can help save a life."

A person can be a living donor if they are 18 years old but not 65 or older. The person must be healthy and can't have diabetes.

Persons interested in being a donor, especially those interested in helping Cantonwine extend his life, can call 317-948-4505 to talk with the medical staff and schedule some tests to see if they qualify.

When that might take place "all depends on how motivated the donor is," Dr. Taber said, indicating he can hook a patient up with a donor "in a couple days."

Cantonwine remains fairly philosophical about the whole thing. He calmly notes that doctors won't remove his bad kidney, "so I'll have three."

"It's like cutting into a water line," he said of the operation. "Splice it right in. It sounds easy. I had a friend who passed away recently who had his transplant 28 or 29 years. It's amazing what they can do now."

Cantonwine, who found out in 2003 that he had a problem developing, is asking potential donors to specify him to receive their kidney. That way, even if the donor doesn't match the Putnam County man, he might benefit from another match that didn't fit someone else in need of a transplant.

Advertising like this is "pretty successful," Dr. Taber said, noting that he has seen it work "about half the time."

"I'd be very grateful if somebody calls and makes an offer," Cantonwine said, "whether it can help me or not. It may help someone else."

In the meantime, Cantonwine has had to give up some of the things he loves. He hasn't helped with the garden exhibit at the Putnam County Fair for two years. He's farmed all his life, but he's got his farm ground rented out and reduced his former dairy herd to three calves.

And what would Cantonwine do with the extra time a kidney transplant would give him?

"Hopefully enjoy it," he reasoned. "I've got things to do at home ... I'd like to do some traveling.

"I like to garden and I've always had a good-size garden but I cut that down quite a bit this year."

He cautioned others that you wouldn't know you had kidney trouble without a blood test or some symptom flaring up.