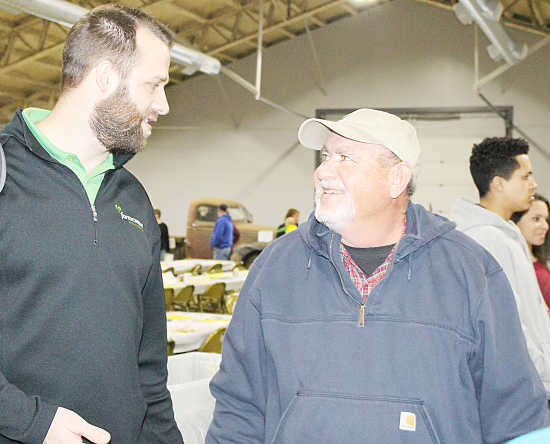 Shortly after being announced as the 2017 Farmer of the Year, Ron Cash (right) accepts congratulations from Lee Fordice Saturday.
Banner Graphic/JARED JERNAGAN

Farming, by its very nature, is a humble pursuit.

As most of us walk across the dirt, never giving it a second thought, these men and women draw their very livelihood from it.

Never mind that in the process they feed the rest of us. 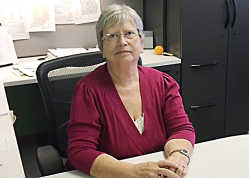 A farmer doesn’t mind talking — about the weather, grain futures or maybe even about Purdue’s draw in the NCAA Tournament — but ask him what makes him so good at his job and he’s likely to clam up.

It’s fitting, then, that Ron Cash, the 2017 winner of the Putnam County Ag Day Farmer of the Year had just two simple words after accepting his award.

“Thank you,” Cash said before leaving the stage.

Cash was one of two Hall of Fame award winners announced Saturday at the annual event at the Putnam County Fairgrounds Community Center, with former Soil and Water Conservation District Director Sue Crafton winning the 2017 Friend of the Farmer.

Now retired and fighting illness in North Carolina, Crafton was unable to attend the event.

A lifelong resident of Putnam County, Cash got his start in farming tagging along with his dad, Bob Cash.

He got his start in the professional world at IBM, but continued working on the family farm. In 1971, he went to his father with a written plan to leave IBM, increase the family hog operation and increase the acreage by renting ground.

This was the beginning of Double R Farms. Today, Ron and wife Sherry still oversee the Marion Township operation.

Describing Ron as “a humble man who does not like to have the attention focused on himself,” award presenter Jenna Nees chose to share a number of thoughts that friends — several of them fellow Hall of Fame award winners — shared about Ron, rather than an in-depth biography.

As Nees read, it became clear that, while Cash may not have much to say about himself, plenty of others don’t have that problem.

• “I am proud to say that Ron is the brother I never had,” Mike Goss said. “No one is more honest, more steady, more hardworking and willing to help.”

• “Ron is an excellent representative of agriculture in Putnam County,” Ken Carrington said. “He has set a great example of top level management in crops, soil conservation, and livestock.”

• “Ron Cash is a well deserved recipient of the Putnam County Ag Hall of Fame,” Mark Legan said. “Ron is an upstanding member of the community as well as a progressive farmer willing to adapt innovative technologies to improve his farm. There are a handful of people that over the years have enabled our family to farm and Ron is one of them.”

• “Ron is a thoughtful person who is always trying to help someone out no matter who they are or what their need is,” Chad Glaze said. “He is also very strong in his faith which makes for a great role model.”

• “I have known Ron for some 40 years and I can’t think of anyone more deserving than Ron Cash for the Farmer of the Year Award,” Keith Berry said. “Anytime we needed help with anything Ron was there and still is.”

• “Ron treats his profession as he does his family and community — with honesty, hard work, studying options, then decision making,” Larry Timm said. “Ron is very respectful of all he is involved with and all respect him for his personal and professional accomplishments.”

• “Ron is an innovator in soil conservation and always willing to share both his successes and failures with his fellow farmers,” Roger Bailey said. “He truly is “a farmer outstanding in his field.’”

• “While Ron would be an excellent choice for farmer of the year based solely on his livestock and grain crop production, he is more than a farmer to those he lives with, works with and lives in community with,” Nathan Couch said. “Putnam County is a better community because of his mindfulness of future generations, his neighbors and the people of Putnam County. Ron consistently takes what God has placed in his hands and uses it for a cause bigger than himself. I am thankful to call him a friend.”

• “Ron is a hard worker, honest, always willing to help others and an excellent role model,” Vurlin Clark said. “I’ve known Ron all my life and I’m proud to call him my friend.”

Clearly moved by the kind words and the award, Cash was still brief with his comments after the ceremony.

“I appreciate what they said,” Cash commented.

With children, grandchildren and even his two sisters in attendance, Cash expressed his appreciation for Sherry’s efforts in getting the family to the event.

The award was a surprise, but he began to catch on as more family members arrived for the Ag Day Breakfast.

“Not until I saw my oldest sister walk in, the I saw all my grandchildren here and I thought, ‘What the heck?’” Cash said.

Having successfully gotten the family out for her husband, Sherry Cash was more willing to express her pride in Ron’s accomplishments. She especially latched onto Couch’s comments about Ron’s concern for future generations.

“I think what I’m so proud of his about is he’s a good steward of the land,” Sherry said. “I liked what one of the men said about him, that he does his work with future generations in mind.”

It was fitting, then, that Cash received his award in the same year as Crafton, whose 16 years as SWCD Director were devoted to good stewardship of the land of Putnam County and preservation of the soil and waterways.

Nees described Crafton as “a friendly face at the Mini Farm Fest for years” who “asked youth what common household item on display was made with soil.”

Crafton also spent countless hours educating farmers and other land owners of how to be better stewards of their land, as well as in securing multiple grants for conservation in Putnam County and throughout the Big Walnut watershed.