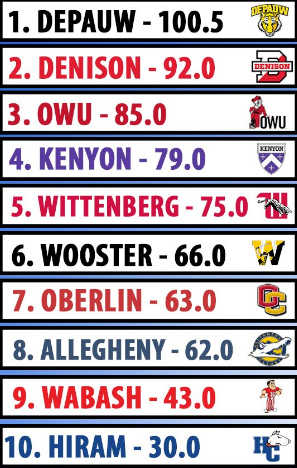 DePauw University won one winter sport league title and finished in the top five in four additional sports to maintain its lead in the race for the 2016-17 North Coast Athletic Conference All-Sports Championship.

DePauw accumulated 41.5 total all-sports points during the winter season and now holds an eight-and-a-half point lead over Denison by a 100.5-92.0 margin in the race for the coveted Dennis M. Collins All-Sports Trophy.

The Big Red recorded the most all-sports points during the winter season with 46.5 after posting five top-five finishes.

DU won league titles in both men’s and women’s swimming and diving and finished in a tie for second in men’s basketball. The Big Red were also part of a four-way tie for third-place in women’s basketball and the fourth-place team in women’s indoor track and field.

Ohio Wesleyan, which last won the NCAC all-sports title in 2008-09, won league titles in both men’s basketball and men’s indoor track and field to sit in third-place with 85.0 points, while Kenyon sits fourth with 79 after posting second-place finishes in women’s basketball and both men’s and women’s swimming and diving.

Oberlin picked up the last title of the winter season by winning its first outright league championship in women’s indoor track and field.

The All-Sports champion earns the Dennis M. Collins All-Sports Trophy, given annually to the school that performs the best across the NCAC’s 23 sports.

Ten points are awarded for a first-place finish, nine for a second, eight for a third, and so on.