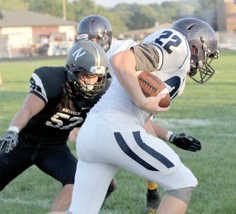 North Putnam’s Max Haste (22) looks to go for yardage after the catch against Northview last fall.
Carey Fox photo for the Banner Graphic

The Marian-bound Cougar has already been honored as all-Putnam County, all-Western Indiana Conference, all-Wabash Valley Football Coaches Association, all-region and all-state after a monster senior season in which he caught 49 passes for 770 yards and three touchdowns.

His most recent honor came earlier this month when he was chosen as the only Putnam County representative in the Indiana Football Coaches Association North-South All-Star Game, which will be played July 14 at North Central High School in Indianapolis.

A complete list of North Putnam players selected for this prestigious game was not available, but Barrett recalled that Adam Vondersaar (2008), Griffen Dahlstrom (2010), Travis Franklin (2011) and Nate Bryan (2012) all played in the game during his tenure at the school.

South Putnam’s Joe Masters, who will be teammates with Haste at Marian this fall, also participated in the event last summer.

Other Western Indiana Conference players chosen for the game are Trey Powell of Sullivan and Mason Moon of Northview, both of whom will be playing collegiately for Indiana State as preferred walk-ons.

Pasch, a 6-2, 250-pound lineman, is narrowing down his decision between DePauw, Wabash and Concordia (Ill.).

Haste will be joined by fellow Cougars Jack Kendall and Solomon Gross on the Gold Division team, which also includes Noah Duby and Zeb Holder of Cloverdale.