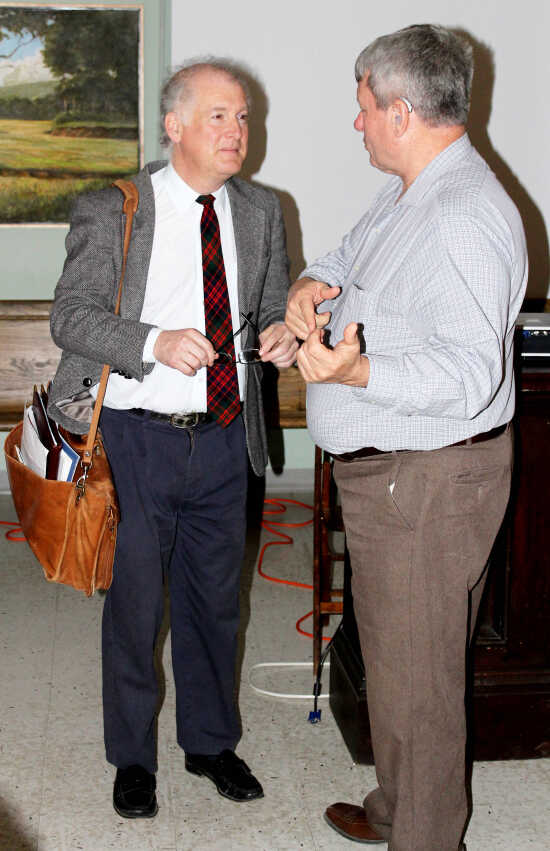 Springtime is stacking up as a busy time for the Heritage Preservation Society (HPS) of Putnam County.

Projects involving new courthouse clocks, the restoration of the Civil War Monument at Forest Hill Cemetery and a new, updated website for the organization are under way.

During the recent HPS annual meeting, President Phil Gick told members it is anticipated that the courthouse clocks (both north and south sides of the historic building in Greencastle) will be installed next month with a formal dedication planned for Friday, May 5 during the downtown First Friday celebration.

Gick reminded the group that the clocks will feature translucent dials to better allow the public to see what time is at night.

While $22,500 was deemed necessary to complete the project, more than that has been donated or pledged, Gick said, recently telling the Banner Graphic that the amount is aproximately $23,000.

The project will replace the 35-year-old clock on the south gable of the courthouse, while installing an additional clock where an unappealing vent exists on the north gable.

Designed and installed by Smith’s Bell and Clock Service of Camby, the new clocks will include backlit faces, digital chimes and amps and a lithium battery backup for auto time correction.

Meanwhile, the long-awaited Civil War Monument restoration is due for completion by this June, Gick said, as a collaborative effort with the City of Greencastle.

While HPS has raised much of the funding for the project, the city has signed the documents to proceed with the restoration -- a project whose necessity first emerged in the fall of 2011. Both the city and county have pledged their support to the project.

The restoration is finally nearing reality, thanks in part to the receipt of a $40,000 Heritage Preservation Fund Grant (HPFG), made possible by Forest Hill Cemetery being listed on the National Register in July 2015.

The grant has been awarded to secure the stabilization and restoration of the monument erected in July 1870. HPS also received a $50,000 Envision Grant from the Putnam County Foundation in January 2015.

In August 2015, Arsee Engineering provided an estimate of cost for restoration of the monument at $110,000.

Titled “Western Soldier on Guard” and sculpted by Thomas David Jones (who erected basically a twin statue in Pomeroy, Ohio), the monument is actually a three-tiered structure with the bottom portion made of Indiana limestone from Oolitic in Lawrence County, while the upper section appears to be a variety of sandstone.

The center section of the monument is made of Berea sandstone, quarried from a specific area of Ohio that no longer provides such material.

History notes that the Putnam County Civil War Monument was the third such statue erected in the state. Dedicated just five years after the war ended, it was the first Civil War monument in Indiana to feature a human figure, and the only Hoosier monument displaying a seated soldier.

“There is no other figure like him in the state,” the website Sculptural Civil War Monuments in Indiana notes, referring to the noble figure as “the unusually seated cavalry soldier.”

Uniquely, the monument also lists the names of 321 county residents who died in the Civil War.

Meanwhile, HPS is also hoping to have a new website up and running within two months, and one of the elements of it is expected to be a digital tourism opportunity provided by Ron Morris of the Ball State University History Department and his students. The project will not be an app, both Gick and Morris stressed.

However, the interactive website will provide exposure to what small communities like the budding historic districts of Cloverdale, Bainbridge, Roachdale and Russellville have to offer through an interactive map and photos with descriptions of what there is to see and experience locally.

“Digital tourism is always open,” Morris said, touting the web presence. “Millennials expect to find everything on line or they don’t think it’s there.”

The interactive effort will provide “a first impression of things they will see even before they come to Putnam County,” Morris added.

The project is expected to be completed during this semester at Ball State.

“We are excited to have this kind of an opportunity for the community,” Gick, the HPS president for 2017-18, commented in summation.