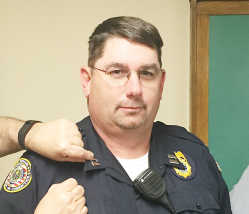 Clark started his Indiana Department of Correction (IDOC) career in 1994 when he was hired as a correctional officer. He has served in many capacities such as a working in the restricted housing units, dorm officer, and street officer.

He was promoted to the rank of sergeant in 2000 and then again to lieutenant in 2011.

Not only has Clark been an officer, but in his time with the IDOC he has been trained in pest control for the facility, quick response team and was firearms certified.

He was also a master firefighter who served as assistant fire chief. He retired from the Putnamville Facility Fire Department in 2011.

Clark is trained as a hazmat technician for weapons of mass destruction and was one of the first field training officers when the program was started at Putnamville.

“Captain Clark has a long history within our facility and has knowledge in many areas,” Smith said. “He will be a great asset as a shift supervisor.”