What didn't happen at Sunday's 178th DePauw University commencement was certainly an element of the pomp and circumstance of the proceedings.

First of all, after a soggy week and damp dawn with early-on predictions of a 90 percent chance of rain for the 10:30 a.m. ceremony, nary a drop fell once the 561 members of the Class of 2017 began their processional toward Holton Quadrangle. 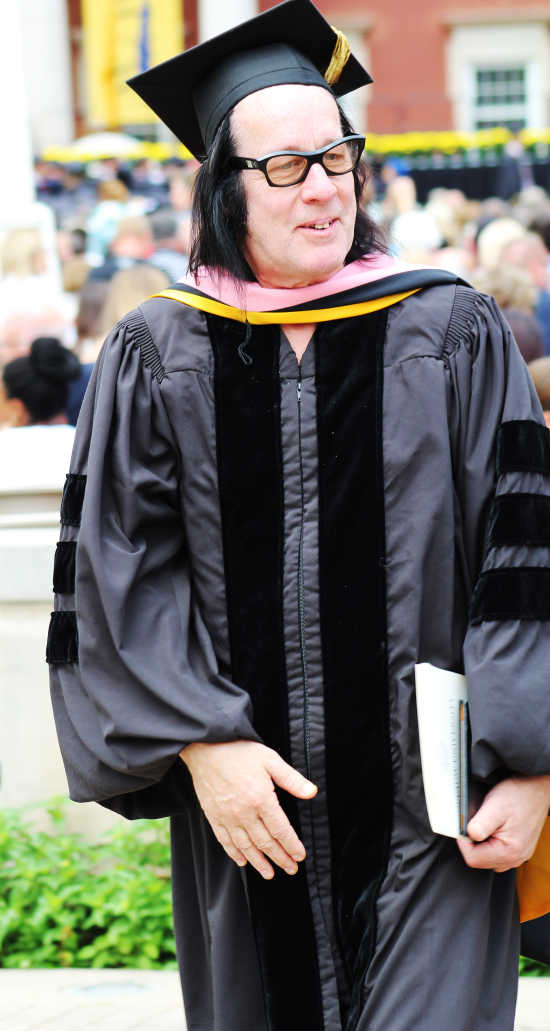 And then during what was expected to be one of the highlight moments of the graduation ceremony, rock music legend Todd Rundgren didn't bang a drum for a second, let alone all day, nor did he speak a word from the commencement stage.

Many in the audience of parents, faculty and friends thought he might as least have said, "Hello, it's me ..." -- the title, of course, of one of his most famous singles.

But in a confusing turn of events, just as Rundgren was bestowed with the traditional honorary degree hood as a Doctor of Performing Arts, the DePauw University Band struck up a rendition of Rundgren's "All the Children Sing."

"(University Band Director) Craig Pare had a student who wanted to do a version of one of Rundgren's songs and play it as a surprise, which they clearly did," Owen told the Banner Graphic a short time after the ceremony.

"I think the music playing threw him (Rundgren) off and he just went back to his seat and probably thought he wasn't supposed to speak," Owen suggested.

Rundgren's wife Michele was in on the idea. In fact, she was able to get out of him which one of his songs he would want to hear played if a band or orchestra chose to play one.

"I think he just got spooked by the music," Owen said.

After all, it's not like Rundgren isn't an experienced speaker. He has been at DePauw previously to give an Ubben Lecture. And just last week he spoke at the Berklee College of Music in Boston commencement without any notes. A You Tube video of the speech runs 14 minutes.

"In trying to make it special," Owen added, "I think we may have messed it up."

Before taking Rundgren and his wife to the Indianapolis Airport later Sunday to catch their flight home, Owen and the rock star sat down for a short explanation video. 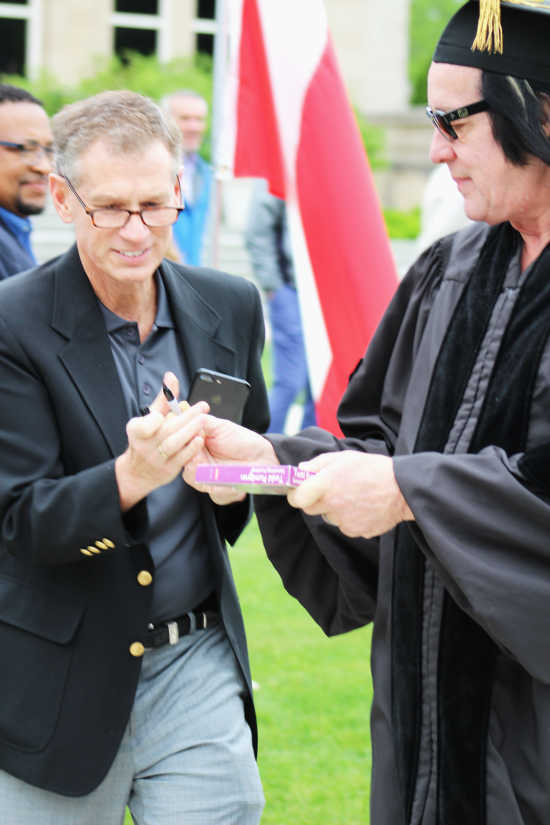 In it, Owen begins by shouldering the blame, saying, "Because I forgot to warn him we were going to play music during the ceremony, things got out of whack."

He then asked Rundgren what he would have told the DePauw Class of 2017 had he spoken.

"I have a certain amount of envy for them," the veteran rocker began. "Neither of my parents went to college, and I didn't go to college. My kids went to community college but that doesn't have the same sort of legacy about it."

Rundgren praised "the lineage of a school like DePauw," adding that it has traditions that alumni parents and grandparents have passed along to current students.

"There's continuity to it," the 68-year-old Pennsylvania native said. "I never really experienced that because I never experienced what going to college was like."

As far as Rundgren offering advice to the new DPU graduates, he got a laugh out of Owen by responding with "like they need more advice from me."

But then he offered what he admitted seems "kind of the opposite of some of the other messages" from Sunday speakers.

"I got to his point," Rundgren said, "because I wasn't afraid to leave my old self behind and become something different.

"The hardest thing in the world to possibly do is change yourself," he said, urging graduates to "be prepared no matter how attached you are to your habits and your ways of thinking to just completely discard them and start over.

"Of course you're supposed to believe in yourself," Rundgren assured, "but you also have to be honest with yourself, and if there's something about that that you don't like, you do have the power to change. You just have to make that decision."

With that, he was done spouting advice.

"I wasn't going to talk much longer than that anyway," Rundgren concluded.