Cougars outgunned by Arrows in shootout 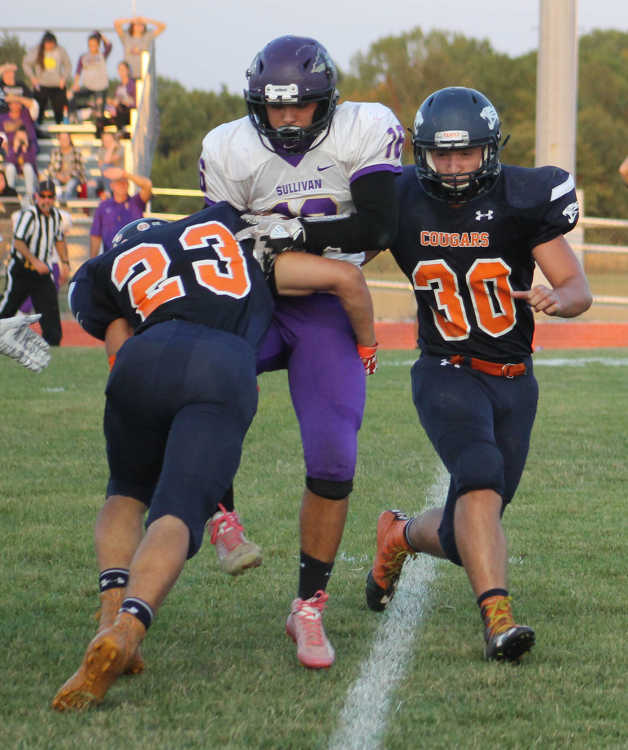 The Cougar offense flashed some big plays, but Arrows put on an offensive display to defeat North 47-27 in high school football.

“This is one of the best football teams we will see this year. They are a great team, but that is the level of team we have to beat if we are going to make a run in the tournament,” North Putnam head coach Sam Carnes said as his team fell to 1-3 on the season and 1-1 in the conference.

Sullivan’s high-powered offense racked up 446 total yards on the night and kept the Cougar offense off the field. The Arrows ran 41 more offensive plays than the Cougars on the night using their balanced, spread offense.

That offense took the opening kickoff and drove 62 yards to open the scoring with a Wes Bedwell five-yard run. Jacob Voliva added the PAT kick and the Arrows had a 7-0 lead.

The Cougar offense looked like it might match the pace early. North picked up three first downs and marched down to the Sullivan 31-yard line, but fumbled the ball away and the Arrows then drove 68 yards for another score. This time Bedwell scored from two yards out. The PAT kick was blocked and Sullivan led 13-0.

Scott Proctor brought the homecoming crowd to its feet on the ensuing kickoff. The sophomore took the kick at the 10-yard line and raced 90 yards to bring the Cougars to within a touchdown. Gage Bell kicked the extra point and North had cut the lead to 13-7.

The Cougars then shocked the Arrows and recovered the onside kick, but the Arrows intercepted a Hayden Rudes pass on the first play from scrimmage and pounded the ball down the field for a 77-yard scoring drive to go up 19-7. Jack Conner hit Dakota Caton with a 16-yard scoring strike. The two-point conversion failed, but Sullivan had the momentum going into the locker room.

“We ran only 13 plays in the first half. We had that kickoff return for a touchdown and that was awesome, but our defense had to get right back on the field and they got really tired,” Carnes said.

The turnover bug hurt the Cougars early in the second half. Sullivan’s Chris Taylor picked off a Cougar pass attempt and ran it back 24 yards for a touchdown. Conner picked up the two-point conversion on a read option run and the Arrows led 27-7 early in the third quarter.

“You can’t have three turnovers and win ball games. We made too many mistakes and miscues,” Carnes said.

The quick-strike Cougars tried to rally on its next play from scrimmage. Chris Murray took a handoff and raced 75 yards to cut the lead to two touchdowns. After Bell added the PAT kick, North trailed 27-14.

“Chris Murray played phenomenally tonight. He made some huge runs. Austin Huffman, as a pulling guard, laid the wood to some guys out there. Those touchdown runs were his also,” Carnes said.

The high-scoring Arrows tried to close the game out on its next possession. Sullivan drove 80 yards, overcoming a couple of penalties and scored again. This score was a Conner-to-Karter Vernelson 25-yard pass and Sullivan led 33-14.

Sullivan’s offense just kept plugging along. On the ensuing possession, Conner scored his second touchdown of the night from seven yards out and extended the lead to 39-20.

The fourth quarter didn’t disappoint offensively either. The Arrows drove down inside the Cougar 10-yard line, but North’s defense rose up and forced Sullivan to give the ball up on downs.

Unfortunately, North’s offense went three and out. Sullivan capitalized by taking the next possession 62 yards to extend its lead to 47-20. Caton caught his second touchdown pass of the game from Conner, this one from four yards out.

North was able to take advantage of Sullivan’s only turnover on the night. The Arrows fumbled a punt snap and Aidan Baker scored from eight yards out to set the final margin at 47-27.

“We are excited about tonight as frustrating as the loss is. We’ve lost to three good football teams this year. These kids care about each other, love each other. No one is going to quit on each other. It is going to be a great second half of the season,” Carnes said.

The Cougars will make their first road trip of the season next Friday as they travel down to county rival Cloverdale.