By FRANK PHILLIPS, For the Banner Graphic 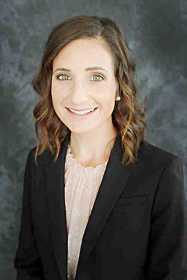 BRAZIL — The daughter of Putnam County Prosecutor Tim Bookwalter is hoping to follow in her dad’s footsteps one county away.

Clarke made her announcement at the September meeting of the Clay County Republican Club.

“I always wanted to be a prosecutor,” Clarke said. “My dad was elected Putnam County prosecutor when I was in high school. One of his first cases involved a methamphetamine addict.

“Growing up I wanted to be a prosecutor and do what my dad did. I wanted to represent victims in the courtroom.”

Clarke said she is “aggressive” in the courtroom and wants to try cases.

“I don’t want to be an administrator in a big county like Hamilton where you never see a courtroom,” she said. “I want to be in the courtroom, trying cases.”

In recent years, she has been a part of the Indiana Kids Election with Judge Blaine Akers, the Brazil Rotary Club, Law Day 2016 for Northview High School students, the Reality Store at North Clay Middle School, and other activities.

Emily and her husband Josh Clarke are residents of Clay County and have an infant daughter.