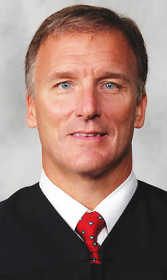 Scammers have been calling local residents claiming to be Deputy Kenneth Cook of the Putnam County Sheriff’s Department. No such officer exists at PCSD.

“Deputy Cook” goes on to tell the would-be victims that a warrant has been issued for their arrest for failure to appear for jury duty.

Despite using the name of a nonexistent deputy, other details are startlingly accurate, as the fake deputy even mentions Putnam Circuit Court and Judge Headley in the call.

The scammers also know the phone numbers, addresses and spouses’ names of their targets.

The caller goes on to say that the subject will be arrested within 24 hours if a fine is not paid with a prepaid gift card.

Headley was made aware of the problem early Tuesday afternoon when a couple of women contacted his office about the scam attempt.

PCSD fielded at least a dozen more complaints in less than two hours, some by phone and others who went to the sheriff’s office to inquire.

Besides the fact that court fees are never paid with prepaid cards, Judge Headley points out that those who miss jury duty are given their own literal day in court to explain themselves.

“My policy is to set an immediate hearing for that person and require them to come into court and explain to me why it is they missed,” Headley said. “Sometimes people are on vacation, sometimes they space it.

“I give them the right to at least come in and explain themselves.”

Headley added that while he may give notice through a PCSD deputy, a fine is never immediately issued.

“I might have a sheriff’s deputy serve them with a notice,” Headley said. “There is not an immediate monetary fine, at least not in my court. I try to grant them due process.”

The judge said that although people are occasionally thumbing their nose at the court, and have been punished for such behavior, much more often it is a simple misunderstanding.

“Most of the time, they’re very conciliatory,” Headley said, adding that he has even had people say “put me first on the list for the next one.”

The judge added that one of the things he loves about living in Putnam County is that there are civic-minded residents who tend to take pride in the court system and jury duty.