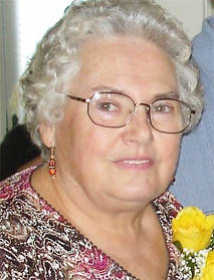 Tom and Susie were married for 58 years and resided on their farm in Putnam County.

Susie worked at Standard Life Insurance as a secretary until she had her son, Patrick.

Susie was preceded in death by her parents, Paul and Louise Heffelman; two brothers, Fred Heffelman and Russ Heffelman; and one sister, Joellen Knuth.

Susie was a selfless volunteer her entire life. When her children were young, she led Cub Scout Troops, the school PTA and other school functions.

Susie was also known for her wonderful cooking and baking, especially her pies. She was an avid seamstress, gardener, basket weaver and scrapbooker -- a true "Susie Homemaker." In her later years she enjoyed making handmade greeting cards.

Susie was a past president, treasurer and member of the Purdue Extension Homemakers Club, Chapter Club 16 and the Fillmore Christian Church. She spent hours crocheting hats, making blankets and other supplies for local children's hospitals and cancer treatment patients, Susie herself being a nine-year cancer survivor.

Visitation will be at Hopkins-Rector Funeral Home, Greencastle, on Thursday, Sept. 28 from 4-6 p.m. with funeral services beginning at 6 p.m.