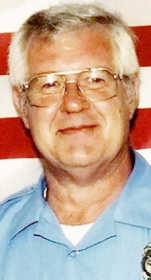 Tom was born in Brooklyn, N.Y., the son of William and Janet Schmalix.

He was a 1967 graduate of Sheepshead Bay High School in Brooklyn, N.Y. He also attended Indiana State University.

Mr. Schmalix proudly served in the United States Navy during the Vietnam War.

He was a lifetime member of the VFW and a member of Optimist Club.

Tom was a millwright at Linkbelt/Rexnord Bearing for more than 30 years until his retirement in 2005.

He was also a volunteer firefighter with Jefferson Township Fire Department where he served as chief for several years.

He was preceded in death by his parents; and a sister, Mary Schmalix.

Services will be held at 1 p.m. Thursday, Sept. 28 at Hopkins-Rector Funeral Home, Greencastle. Clyde Stringer will be the master of ceremonies.

Friends may call at Hopkins-Rector Funeral Home from 11 a.m. until time of service Thursday.