Marilyn was employed as a bookkeeper for 17 years in the Brazil location of the Terre Haute Gas Co., currently known as Vectren. Affectionately known as "Mim," Marilyn was a kind, generous, loyal person who brought everlasting joy to her family and friends. Mim was a very devoted wife who was a gentle and loving caregiver and partner. She was the best of moms with patience that never ended. 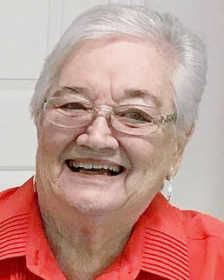 Marilyn was effervescent and adventurous, graceful and charming. She loved NASCAR racing, especially her membership standing of being No. 25 in Jeff Gordon's Fan Club. Her trophy for highest score in bowling was 217, beating her husband's high game of 210 in the same year. She was Shopper-Extraodinaire because she had an artist's eye and understood what would work.

Grandma Mim taught her grandchildren to play card games and she loved getting involved -- even when it meant running in the yard, playing with her grandchildren in the sprinkler. Sleepovers were fantastic at Grandma Mim's. Mealtimes were opportunities for sharing stories, laughter and love. Her macaroni salad and pecan pie were family favorites. Her children and grandchildren are blessed to have received many handwritten cards which sent her love -- they're keepsakes that will always be treasured. Marilyn's grandchildren knew, without a doubt, that she was always thinking of them and that she was proud of them all. When they were together in person, her hugs were always full of extra love.

Above all, Marilyn was a role model of dedication and how to weather life's storms with grace, dignity and courage. She was strength and forgiveness personified. Her good humor, laughter and stories were magnetic. Her family is grateful for the opportunity to be recipients of the characteristics she consistently displayed.

Marilyn was preceded in death by her parents, Orville and Mildred Kirkling Albright, and her brother, Bill Albright.

Burial will follow at Rio Grande Valley State Veterans Cemetery in Mission, Texas, under the direction of Ric Brown FFH in Mission.