PUTNAMVILLE -- The 41-year-old wife of a Putnamville Correctional Facility (PCF) offender has been arrested following a reported several-month investigation over alleged illegal drug activity between husband and wife. 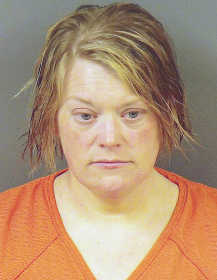 The facility's Office of Investigations and Intelligence (OII) and especially Investigator Robert Evans had been investigating Offender Samuel Hopson and his wife Angela for several months, PCF officials said.

When her most recent visit ended, Mrs. Hopson was confronted by Correctional Police Officer and Lead Investigator Keith McDonald and was escorted to OII for questioning. McDonald served a search warrant on her for any and all cell phone and or storage devices, data or memory that she may have had in her possession or vehicle.

The warrant had been secured from the Putnam County Prosecutor's Office on Sept. 19, based on information obtained from ongoing investigations related to prior arrests.

Several names, phone numbers and Department of Correction offender numbers were found as well. She also admitted to selling, for offender Samuel Hopson, Suboxone and her son's Adderall, for which she is currently being investigated by the Department of Child Services. Mrs. Hopson also admitted to repeatedly delivering drugs to Lieber State Park for offenders to retrieve.

She was placed under arrest by Lead Investigator/CPO McDonald and transported to the Putnam County Jail by Investigators Dave Wire and Angela Taylor.

Angela Hopson was charged with trafficking with an inmate, a Level 6 felony and possession of controlled substance, a Level 6 felony. She was transported to the Putnam County Jail, where she is being held on $10,000 cash bond.

Samuel Hopson is currently serving a 2,005-day sentence for Level 6 felony escape out of Tippecanoe County and has an earliest possible release date of Jan. 5, 2020.

"This investigation took many manhours and dedication, but we got our arrest on this one," Warden Brian Smith said. "The OII team and everyone involved did a great job."