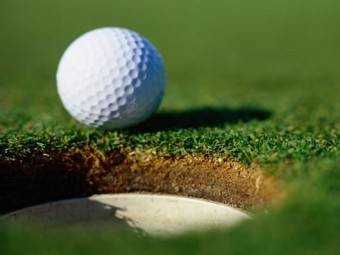 FRANKLIN – Putnam County girls’ golfers concluded their seasons on Saturday in the Roncalli Regional on an oppressively hot day.

Greencastle placed 16th in the team standings, while at-large individual players Taylor Dixon (98) of North Putnam and Sammie Shrum (118) both fell short of advancing to the state finals as individuals.

Marin Nally led Greencastle with a 97, while Macey Masten had a 102, Bailey Shuee and Rose White each had a 107 and Molly Ramey added a 119.

Paquin noted that most courses played by the Cubs have very few of the hazards that they faced on Saturday.

“My observation as I watched our players play was that each player probably added 10-15 shots to her score based on the difficulty of the course,” he said. “Most players don’t have the facilities, time or the course difficulty to practice the various shots needed to compete equally with the schools that have these advantages. Another factor to be considered is the time commitment, practice routine and course quality to make teams able to compete on equal terms.”

Paquin was pleased with the overall season, especially considering that more than half of the team members not had played golf before this fall.

“The Cubs competed well during the season and improved throughout the year to get to the regional level,” he said. “All the players were hampered by various penalties and course obstacles during the round. The heat and dry conditions also played a role in the final score. I’m sure the girls are proud of the effort and determination they showed during the tournament.”

Paquin noted that special recognition goes to the three seniors who played their last golf tournament for GHS.

“Macey, Rose and Marin worked very hard this season to mentor and help our younger players [Bailey and Molly] to improve and show that hard work pays off,” he said. “This was a very successful season with lots of records and accomplishments to a very deserving group of young women.”

“This has been driven into Taylor Dixon’s mindset since she started to play golf for me as a freshman,” coach Patrick said. “Many times she has worn a hat with that motto. It isn’t all about winning, or making medalist, or advancing, but did you do your best today. An extremely hot day didn’t keep Taylor from playing her best for the day at regionals on Saturday.”

Patrick said a good practice on the range beforehand, and a walk of confidence to her first tee box, helped Dixon to finish her career strongly.

“Having practiced at the course a few days earlier, it was clear that with little, if any, rain in the forecast, the greens would be hard to hold and running fast,” she said. “Putting proved to be her nemesis of the day. However, she managed to avoid the water hazards and sand bunkers that plague the course, had tremendous recovery shots after errant hits and lowered her first regional showing by 25 strokes.”

Dixon overcame an early-season injury to still accomplish all three of her pre-season goals.

“With a twisted ankle early on it made it difficult to play the same game as I had this summer,” she said. “However, I still accomplished all three of my goals — all-county, all-conference and advancing out of sectionals. By doing so I learned how to overcome this injury and work harder, rather than give up, which ended in an amazing season.”

“The most rewarding part of playing for the second year was knowing what level of competition to expect,” she said. “Also being able to go into it with a better mindset and having no expectations.”

Cloverdale coach Kyle Walter was proud of how Shrum competed on Saturday.

“I know her score may not reflect it, but she did hit some really great shots throughout the day,” he said. “The experience she gained will definitely help her out as she moves forward in her golf career over the next two years. Saturday was only the fifth 18-hole match that Sammie has played.

“With a little practice in the off season I think Sammie could develop into a really great golfer and I look forward to getting to witness that first-hand.”