Greencastle players and coaches celebrate their Western Indiana Conference championship, which they earned with a 4-0 win over Brown County.
Banner Graphic/JOEY BENNETT

About a year ago, Greencastle’s boys’ soccer team was seemingly headed toward a Western Indiana Conference title.

The Tiger Cubs won the West Division, and beat East Division champ Edgewood 8-1 in the week before the championship match as part of a long winning streak.

Senior goalie Brody Watson makes no secret of what happened then.

“At the end of last season, we got too cocky when we were on that winning streak,” he said. “Now we have matured, and figured out how to maintain a winning streak and keep the mindset of winning.”

Watson recorded his ninth shutout of the season on Saturday — and fourth straight — as the Cubs wrapped up their first-ever WIC soccer title with a 4-0 win over Brown County.

Watson has allowed just seven goals in 14 matches this year, and admits his teammates make things pretty easy for him.

“Our defenders do a great job of holding down the middle,” he said. “They make my job pretty easy.

As usual, senior Evan Crowe had a huge hand in the Cub scoring.

Crowe scored both of the team’s goals in the first half, the first with an assist from Hector Lezama and the second unassisted.

Freshman Ivan Glotzbach scored the team’s first goal of the second half, while Crowe assisted Ben Wilkerson for the final goal of the game.

Crowe thinks the team’s mental preparation before Saturday’s match played a big role in the victory. 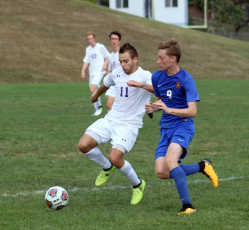 “It was at home, and that helped us a lot,” Crowe said of Saturday’s win. “We all came in early [about 9 a.m.], even though that was two hours before the match. During the match we were hitting it off and the chemistry just connected — from there we started connecting on passes for goals.”

Crowe has not been surprised by the play of his team this year, and thinks the Cubs are “on par” for what he expected.

“We are right where I thought we’d be,” he said. “I had very high hopes for this team, with a lot of seniors who have been playing together since we were nine or 10.”

“Evan Crowe was outstanding,” he said of Saturday’s effort. “Every single goal he had something to do with. The game could have really shifted if Brody Watson did not save the quick free kick Brown County took.”

Sims was pleased that his players were able to ignore the heat level that increased throughout the match.

“Simon Foss constantly stripped the ball from several of their key play makers helping control play and relieve pressure,” he said. “What a great performance in the heat the boys put on. It was great to have such a good game against a team like Brown County that has been playing so well and be able to put the nail in the coffin.”

Foss, another of the team’s senior leaders, agrees with his teammates that things have gone well but the road ahead is still a long one.

“It’s a really big deal for us, especially since it’s the first time we’ve won this conference,” he said. “That was definitely one of our goals coming into the season. It has been every year, and we finally came through.”

Foss thinks the team has a good balance between offense, defense and midfield.

“A lot of time, the teams we play will have a strong offense and score a lot of goals, but they don’t have a good defense,” he said. “The sectional looks good for us, and I’m pretty confident. We’re trying to keep our egos in check. So far we’ve done that.”

Foss’s father, Pedar, has invested a lot of time coaching the current Cub players during their younger days.

“He didn’t play soccer as a kid, but he started getting into it in college,” Simon said. “When he had us he got really involved in the Putnam County Youth Soccer Association. He was the director of coaching a couple of years ago, but he had a huge part in getting the program going.”

Watson credits the elder Foss with helping him get where he is on the soccer field.

“We owe a huge shout out to the man Pedar Foss,” Watson said. “He brought me and all of the seniors to where we are. He understands how to develop you as a kid, as we all grew up together as a unit since we were eight or nine years old.

“We have that chemistry that lets us work together,” he added, “and do what we do best —win soccer games.”

“A lot of credit has to go to our seniors,” he said. “We all know how we want to play, and we all keep each other accountable. It’s really paid off with the kids not wanting to feel those losses again. They know they have come out and done well.”

The Tiger Cubs have a few matches left this week before starting sectional play on Monday at Sullivan.

The IHSAA went to a three-class system this year, with the Cubs assigned to Class 2A.

The other five teams in the Sullivan Sectional are all WIC foes, so the Cubs would have to be considered the favorite going in.

“It’s a positive,” Sims said. “The beauty of soccer is that you can be the best team on the field, but the one who puts the ball in the back of the net is the one that wins.”

Sims think focus is the big thing his team needs to have in order to bring home a sectional title.

“We have done well against a lot of these teams,” he said. “There have still been moments where we have lost focus and let up, and given teams situations they shouldn’t have. We need to stay focused and be ruthless with our game.”

Watson also credits Sims with helping the players mature into a winning unit.

“He knows how to get us into a mindset of what we need to do, and then lets us do our thing,” he said. “We have a good chance to win the sectional, but we’re not going to go in thinking we have it won even though we’ve beaten all the teams in the field.”

Crowe, who plans to play collegiately at St. Mary-of-the-Woods, thinks the team can use its WIC title to have good success in the post-season.

“This win will help us a lot,” he said. “We have a couple of matches left, but we’re already getting ready for the sectional.

Watson is well-versed on Greencastle soccer history, noting the accomplishments of the school’s 2011 regional championship team are looming in the distance.

“This team could go pretty far,” Watson said. “Of course we have to win the sectional first, but I really think we could win the regional.

“We would like to surpass what that 2011 team did and it to the semistate,” he added. “Possibly even to the state. You never know. The dream is big, and the bar is high.”

The success of the school’s other fall sports teams has not been lost on Watson, noting his team’s WIC title was the third of the fall season in the four sports that have decided champions (joining girls’ golf and boys’ tennis).

Watson and his teammates just hope to make it even greater as the post-season approaches.