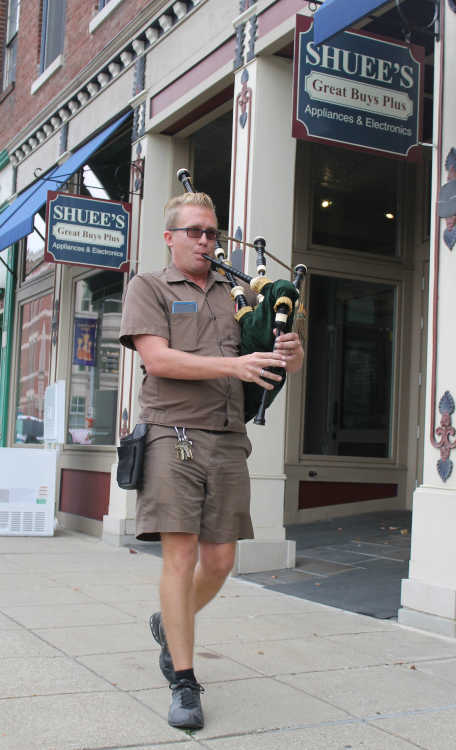 In what is becoming a familiar sight in some parts of Greencastle, UPS driver Stephen Burns marches up Jackons Street and plays bagpipes Wednesday afternoon. A member of the Indianapolis 500 Gordon Pipers, Burns uses his lunch hour to practice the difficult-to-master instrument.
Banner Graphic/JARED JERNAGAN

As Stephen Burns takes a midday walk down a Greencastle street people stop and stare.

While Burns’ familiar, brown UPS uniform may be one thing that sets him apart from other pedestrians, it’s the bagpipes that he’s playing that cause the real stir.

“I love the attention,” Burns, of Mooresville, told the Banner Graphic.

The distinctive timbre of the bagpipes and traditional Scottish tunes such as “Brown Haired Maiden” and “High Road to Gairloch” certainly drew attention on Wednesday.

Doors to businesses opened as workers scanned the area to find the source of the Gaelic sound.

Folks grabbed their phones for a quick picture or video of the unique sight.

On this particular afternoon, Burns parked on Locust Street across from City Hall, then took a 12-block excursion, playing and marching westbound on Washington Street all the way to Jackson Street, around Courthouse Square, then back east on Washington.

Based out of an Indianapolis hub, Burns drives the route that includes DePauw University and other portions of Greencastle.

His bagpipes have begun to build him a bit of a reputation among students and residents.

“I’ve got students at DePauw ask me, ‘Where’s your bagpipes?’ when they see me on deliveries,” Burns said.

However, deliveries are one thing, done on company time, while the bagpipes are another, practiced during lunch hour.

Burns said he’s still relatively new to playing the instrument, which can take years to master. Add to this the hours of a UPS driver and it’s hard to find time for practice.

He tends to get home after dark and “you can’t really play them inside.”

Instead, he finds time in the midst of his busy days on the road.

“You can make your own free time at work,” Burns said.

More information is available at www.500gordonpipers.com.

While one of the missions of the Gordon Pipers is to share Scottish and Gaelic heritage with the public, that wasn’t what got Burns interested to begin with. He’s been told that the Burns name indicates he probably has Scottish blood, but he mainly got interested in the instrument through a former co-worker.

As such, it’s unlikely he’ll be petitioning UPS for a uniform change. But it does beg the question, how would a brown tartan kilt look in place of the familary UPS summer shorts?

We probably won’t be finding out any time soon.