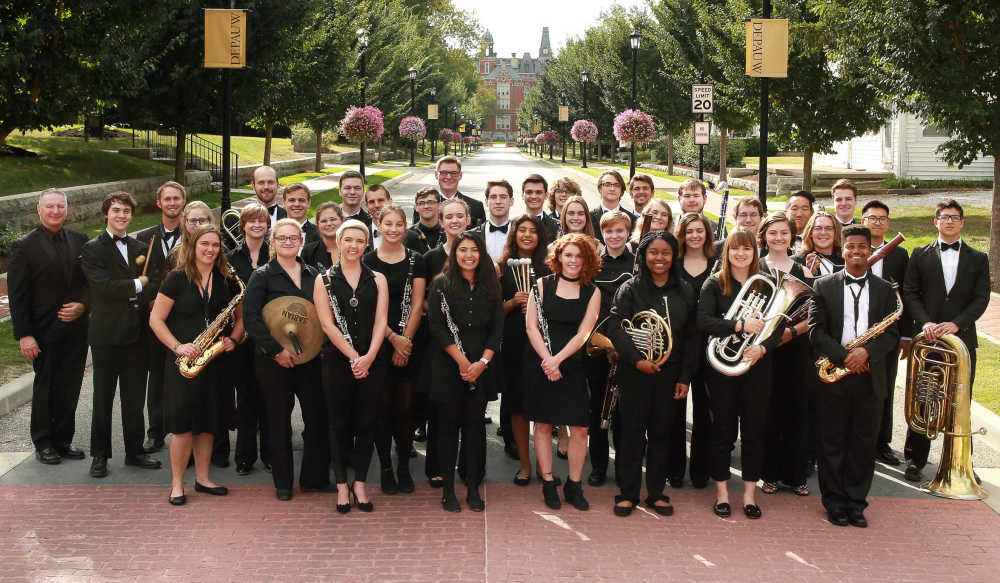 The DePauw University Band will open its 2017-18 season with a rousing concert performance at 3 p.m. Sunday, Oct. 1 in the Green Center’s Kresge Auditorium. Included on the program will be a mix of new and standard works for symphonic band and wind ensemble: “Amazing Grace” by Frank Ticheli, “Transcendent Journey” by Rossano Galante, “Yankee Doodle Fantasie Humoreske” by David Wallis Reeves — along with the world premiere of “Peruvian Fanfare No. 1” by South American composer Antonio Gervasoni.

“We’re especially excited about Gervasoni’s fanfare for several reasons,” Craig Paré, director of University Bands, said. “Most importantly, the composer let us know that our performance of this energetic new work will be the world premiere of the piece. It is also inspired by two traditional dances from the coast of Peru, the ‘marinera’ and the ‘festejo,’ along with a mix of the composer’s own original musical ideas.

“Sunday’s program, which opens with Philip Sparke’s Overture for Woodwinds, will feature the ensemble’s woodwinds,” Paré also noted, “while ‘Yankee Doodle Fantasie Humoreske,’ a fun theme-and-variations piece based on the colonial song, will highlight the virtuosity of all the University Band musicians, with each variation featuring a different instrumental section within the ensemble.”

Later this month, select members of the University Band will have the unique opportunity to participate in the United States Air Force Concert Band and Singing Sergeants performance, Monday, Oct. 23 at 7:30 p.m. These students will play Fred Jewell’s march “E pluribus Unum” alongside the U.S. Air Force musicians, after rehearsing with them during their sound check earlier that day in Kresge Auditorium.

As with all University Band performances, audience members are invited to bring a non-perishable food item that will be donated locally to the Putnam County Emergency Food Pantry. Redeem your food item for a free ticket to the performance.

General admission to student ensemble concerts is $5. Tickets for seniors over 65, youth and all students are free.

For additional information or to purchase tickets online, visit music.depauw.edu or stop by the Green Center, 605 College Ave. The venue’s box office is open from noon to 4 p.m. Monday through Friday and beginning one hour prior to every performance.