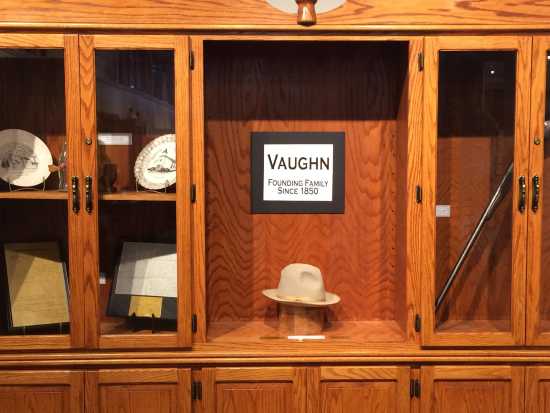 The Vaughn Exhibit at the Putnam County Museum.
Courtesy photo

Here is a short history of the Vaughn (or Vaughan) family, as written by Jordon Vaughn:

“The Vaughn family has been in Putnam County for nine generations. It has produced numerous educators and agricultural leaders who have made an impact on their communities and Putnam County itself. Several Vaughn descendants remain prominent landowners, where some land has been in the family for more than 150 years.”

Joseph and Eleanor (O’Bannon) Vaughan (note the spelling) came from Augusta County, Va., to the Dix River region of Garrard and Lincoln counties in Kentucky, coming through the Cumberland Gap. In Kentucky, they had 14 children. The majority of them headed north to Putnam County near the towns of Mt. Meridian and Belle Union in Jefferson Township as early as 1850.

In 1864, after the death of his father, Joseph, Thompson Vaughan and his family came to settle on the south side of Fillmore in Marion Township. His son, Strother Pitt Vaughan, was the last inhabitant of the Belle Union cabin that currently stands at Robe-Ann Park in Greencastle. They raised six sons in the originally four-room, two-story structure -- Henry William, Selden Louis, Benjamin Frank, Oliver Pitt, Theodore Clarence and Frederick Wesley. Of the six, five dropped the second “a” in their name to “Vaughn.” The youngest, Fred, being the sole “Vaughan.”

With museum member Jordon Vaughn being the main coordinator to the exhibit, and partnering with the museum’s exhibits team of Rita Schendel, Vicky Krider and Mickey Meehan, they have brought together an interesting founding family exhibit. From furniture to photographs and documents of family involvement in Putnam County 4-H program to antique handwritten letters, the thick history of a Putnam County family is steeped in this family exhibit.

Find information at www.PutnamCountyMuseum.org or see Facebook at www.facebook.com/PutnamCoMuseum for upcoming events.