Approving four variance requests on the Jones School redevelopment project Tuesday night, the Greencastle Board of Zoning Appeals got a closer look at how the project is eventually expected to come together.

-- A special exception for a multi-family dwelling in a single-family zoning district.

-- A development standards variance for a reduction in the minimum living area per unit. 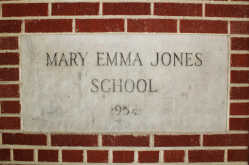 -- A development standards variance for a reduction in minimum ground floor area.

-- A development standards variance for a reduction in the required number of parking spaces.

The latter was easily the most interesting and discussed of the lot. Strict application of the zoning ordinance on the Emma Jones Village project would have required Milestone Ventures -- the same folks who successfully converted Miller School into senior apartments (Miller Asbury) -- to provide two parking spaces per unit.

The proposed senior rental community is designed to include 13 one-bedroom units and 12 two-bedroom units within the school building constructed in 1954 and added-on construction to its northeast side on the 3.08-acre site. Six units will be included in the new construction, while 19 will be created within the old school footprint.

That would have required 50 parking spaces under the city code.

Instead, developer Chuck Heintzelman was asking for 40 spaces, noting that a figure of 1.5 spots per unit at Miller Asbury has provided "ample parking spaces at any time."

At Jones, he said, "we're looking at the most at 25 cars from our residents," along with one each for the property manager and maintenance person for a total of 27. That leaves an additional 13 spaces for visitors and use during special occasions.

As far as the variance for minimum living area (1,600 square feet), the one-bedroom units are 650 square feet and two-bed apartments are 1,000 square feet, more in line with seniors' desires to downsize to small spaces.

Heintzelman said "1,600 square feet would be impossible" within the configuration of the building in which every classroom at a different elevation is to become a separate unit.

At Miller, the units are larger because of the configuration of the building and its former classrooms. One-bed apartments are 700 square feet, while two-bed units at 896 square feet, Heintzelman said.

As was the case at Miller School with its more interesting architecture, "the goal was to preserve the entire building," Heintzelman told the BZA.

He added that the one Jones unit that will be unique will be the apartment created in the kitchen with its slanted ceiling. The remainder of the units will follow classroom lines.

"Jones School is fairly plain," the developer said, noting its 1950s style with its "own unique architecture."

"It's not like Miller School, which has its boys' side and its girls' side. Jones is a little different building," he conceded. "When in doubt, they must have put a door in. I've never seen so many doors in all my life."

He told the BZA he will also preserve the patio overhang off the north side of the gymnasium section of the building, noting that it is supported by "red, round steel posts" in a 1950s-style flare. To give it more mass, the developer said, he will likely have the posts surrounded by a brick facade column.

The project will be removing the curb cut along Liberty Street and turning that driveway and the adjacent asphalt into green space for the residents.

Milestone Ventures, as it did with the Miller School project, will be applying for Indiana tax credits. That application is due in November with the tax credits awarded Feb. 22, 2018. Groundbreaking is expected in October 2018.

Because of the receipt of such tax credits, seniors will have to qualify through income guidelines. Typical monthly rents will be $250-$545 for one-bedroom units and $300-$595 for two-bedroom apartments.

"That's comparable to what we charge at Miller Asbury right now," Heintzelman said, adding that the prices are subject to change.

Milestone Ventures is investing $6 million into the project, Heintzelman said, estimating that property taxes would be about $13,000 annually.

The building falls just outside the historic district, he said, adding that the site is not considered historic or contributing.

"We wish it were, it would have helped us greatly."

The Jones School project will next go before the City Council for second reading on the rezoning of the property at the Council's 7 p.m. meeting Thursday, Oct. 12 at City Hall.