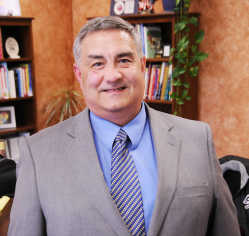 With the expected increase in traffic on Tennessee Street near the site of Greencastle Schools’ upcoming transportation center, and with the center’s lack of fences and relatively remote location in mind, the GCSC school board approved during its September board meeting the sale of a bond in the amount of $1.63 million to revamp its security and HVAC measures while working with the city to improve and maintain the soon-to-be-busy street.

“The bond is set to be sold on Thursday, Oct. 12 and we already have a few banks in the community who are interested in bidding,” GCSC Superintendent Jeff Hubble said. “It’s part of our never-ending ‘fix or replace,’ and the theme of the bond is going to be security and HVAC.”

Replacing a chiller at Ridpath Primary and boilers at the high school, middle school and Tzouanakis Intermediate are among the board’s immediate HVAC plans. Air-conditioning units at Ridpath, Tzouanakis, Deer Meadow and the high school’s McAnally Center are also in the works.

Furthermore, the industrial-sized washer and dryer at the high school, mainly used for cleaning athletic uniforms and equipment, will be replaced.

Of security, the installation of digital cameras around the corporation is imminent.

“We’ve already installed security cameras at both secondary schools, as well as McAnally,” Hubble said, “but we have yet to do Tzouanakis, Deer Meadow and Ridpath, that will use about $315,000 of that (bond). We’re also going to add a few at Central Office and the new transportation center.”

The board hopes to put these security and HVAC plans into action as soon as possible, pending bid approval.

In addition to the bond, Hubble said he and Assistant Superintendent Donovan Garletts recently took part in a brainstorming session with the city’s Redevelopment Commission and members of the city council in hopes to create mutually-beneficial projects that the city and school district could do together, i.e. the maintenance of Tennessee Street.

“We’re going to have the transportation center there and the owner of Zinc Mill Apartments is set to add 100 apartments to the area, so that little road that doesn’t normally see much traffic is about to be seeing a lot more,” Hubble explained. “So, with the transportation center partly responsible for the increase, we hope to work together with the city to get that street some attention.”

Updates of these steps currently underway at GCSC are expected at the board’s next regularly-scheduled public session on Monday, Oct. 23.

• The board approved upon second reading the adoption of several NEOLA Policies. These policies were: 0100 Policy Definitions; 2261.01 Parent Participation in Title I Programs; 5111.01 Homeless Students; 5111.03 Children and Youth in Foster Care; 5330 Use of Medications; 6330 Approval of Contracts; 8355 Authorization for Audio, Video and Digital Recording; 8500 Food Services; and 8510 Wellness.

Only one policy — 8330 Student Records — was tabled for further discussion.

• The board officially opened a public hearing during the meeting, as advertised appropriately twice through various local media, to hear public comment about its current bus replacement plan. Citizen Wayne Lewis, who regularly attends GCSC board meetings, asked what exactly the plan entailed. The plan includes the replacement of two aging buses and one activity bus. Each will be purchased through West Central Coop.

• When the Capital Projects Fund was discussed, Greencastle Mayor Bill Dory, who was in attendance, asked if the board to further explain some of the projects lined up for the fund. Hubble gave an extensive list for which the funds will be used, including (but not limited to) repairing buildings, supporting technology through infrastructure and hiring an architect to perform a study on each of the district’s facilities to see what needs adjusted (which includes repairs/replacements concerning boilers, air conditioning, windows, frames and more) to develop a Building Utilization Plan which plainly lists how long each project will take, and in what order to take them.

• The board accepted a grant in the amount of $25,000 for science teachers Stacie Stoffregen and Stacie Phillips to continue the STEM work. These funds will be used to purchase two weather stations -- one at GMS and one at GHS -- with which the teachers can further their instruction.

• The board accepted a grant in the amount of $1,000 from the Putnam County Community Foundation. The donated funds will be used to seek food or prize donations from area businesses concerning a pilot program which involves parents and teachers working together before and/or after school for support in continuing student education at the home.

• A final donation in the amount of $2,677 was accepted from the 2017 Post-prom Committee. The donation represented proceeds from the junior class’ fundraising efforts and will be donated to the 2017-18 senior class.

• The board hiring, transfer, termination, resignation, retirement and volunteer services of several employees. They were: