‘Small film’ no small feat for Zach Spicer and friends 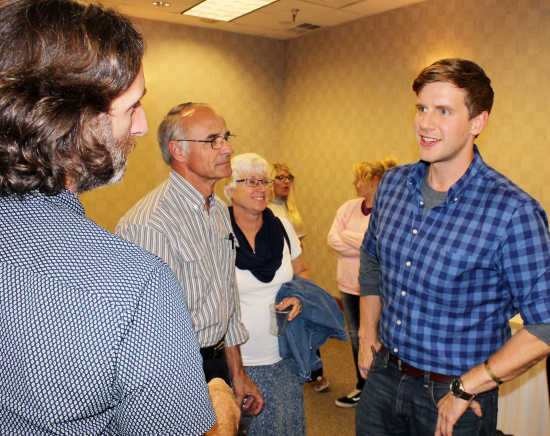 Greeencastle product Zach Spicer (right), star of the film “The Good Catholic” mingles with DePauw University associate professor Seth Friedman (left) of the Department of Communications and Theater, and former Greencastle High School teachers Maurice and Terri McKee in a question-and-answer session at the Inn at DePauw following the showing of the movie recently at Ashley Square Cinemas.
Banner Graphic/ERIC BERNSEE

With the conclusion of an Indiana tour by an Indiana boy on some Indiana nights, Greencastle native Zach Spicer is seeing “The Good Catholic” get great reviews. He’s seeing a “small film” doing big things. And he can’t wait to do it all over again.

The movie, in which the 33-year-old Spicer has the starring role as a priest battling his convictions when an interesting young woman enters his life through the confessional, was shot about as low budget as a film with stars like Danny Glover and John C. McGinley can be shot.

“It was a small film,” Spicer agreed, noting there was just four main actors and four locations. 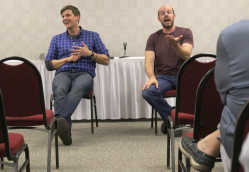 “The Good Catholic” star Zach Spicer (left) and writer-director Paul Shoulberg tackle questions from the audience at the Inn at DePauw following the recent showing of the movie at Ashley Square Cinemas in Greencastle.
Banner Graphic/ERIC BERNSEE

“The only way we were able to make the movie,” the 2002 Greencastle High School graduate added, “is because Bloomington people donated food and shelter.”

A different restaurant brought food to the set almost every day for the cast and crew, while the Grant Street Inn put them up for four months, Spicer said, without charging them a dime.

So now after two weeks in select theaters and touring Indiana with seven showings in 11 days, along with availability on cable On Demand and via iTunes and Amazon, “The Good Catholic” is in the black.

“At this point we’ve recouped the money we put out there,” Spicer told an audience of friends and followers at the Inn at DePauw after the film was shown recently at Ashley Square Cinema. “It usually takes a year, and we did it in the first week and a half.”

Of course there were sound reasons for that. For one, Glover, popular co-star of the long-running “Lethal Weapon” film series and other major roles, took very little money to come to Indiana and play a curmudgeonly priest.

Danny Glover’s normal pay would have been the entire budget of the film, writer-director Paul Shoulberg advised.

One reason Glover and McGinley were available, explained John Armstrong, Spicer’s partner in Pigasus Pictures, is that Marvel has hijacked the box office and “great actors don’t get to do great acting any more” because everything in most movies is crashing and blowing up or digitized creations.

The actors also liked the short commitment to the project, Armstrong said.

While filming in Bloomington over 18 days in January did add to the starkness of the exteriors, that was a byproduct not a plan, Spicer said.

“Danny Glover was only free in January, so we filmed in January,” he explained.

“It was supposed to be shot in the fall when there would be all the beautiful leaves and all,” Shoulberg added. “The starkness does have a cold feeling that had to have influenced it. In editing it, it just felt like a winter movie.”

Because of that, he said, there were a couple of comedic characters whose scenes have seen only the cutting-room floor. The cold setting, he reasoned, helped the movie become more dramatic, although it is still billed as a dramedy with McGinley providing some terrific comedy relief.

As an IU basketball-obsessed priest, McGinley is watching Indiana play Minnesota on TV in one scene and the Big 10 Network camera shows former IU coach Tom Crean, since fired, along the sideline. Of course, he was still the coach when “The Good Catholic” was filmed.

“The minute Crean got fired,” Shoulberg said, “I thought, ‘Great, that dates our film.’ It doesn’t matter to 99 percent of the people sure, but anytime you deal with sports or politics you put yourself in danger of dating your film.”

McGinley was also central to another interesting IU basketball connection, as related by Armstrong, Spicer’s co-producer.

He explained that McGinley routinely goes to great lengths to research his roles, and just knowing that his character was an IU basketball fanatic wasn’t enough. The actor read everything he could get his hands on about the Hoosier basketball tradition and fell in love with the undefeated 1976 NCAA championship IU team, and especially its big, redheaded center, Kent Benson. He became intrigued even more with Benson after learning how Kareem Abdul-Jabbar punched him in the head for being too rough with him on defense during Benson’s very first NBA game.

So when it came time to film “The Good Catholic,” McGinley wanted to wear a No. 54 IU Benson jersey over his priestly robe. That seemed like a simple request, but after researching bookstores, sports shops and online, the moviemakers could not find a No. 54 IU jersey anywhere.

That’s when Armstrong got the brilliant idea to contact Benson to see if they could borrow a jersey from him.

“We got Kent Benson to come down to IU to go to a basketball game with John McGinley,” Armstrong said.

And apparently they hit it off with McGinley explaining the movie and the storyline, and Benson responding excitedly to Armstrong with “John, this is amazing. I’ve talked to (IU athletic director) Fred Glass and they’re going to take my jersey out of the (Assembly) Hall (display).”

Armstrong said he couldn’t believe his ears or his good fortune, and when he showed up to pick up the historic jersey worn by an All-American on the last NCAA team to go undefeated and win the national title, he realized he had nothing to put it in.

So he asked the IU staff if he could unload reams of paper from a nearby Staples box and use it, something to which they readily agreed.

Undaunted, Armstrong held the box out to receive the priceless IU heirloom, only to hear, “Do you want the candy-striped pants, too?’

Stories like that are why making movies in Indiana are so special to Spicer, Shoulberg and Armstrong, who all met while students at IU.

Next up for the IU trio is something they call “Ms. White Light,” to be filmed in Evansville starting sometime yet this month.

“It’s the hilarious comedy about death we’ve all been waiting for,” Spicer offered in jest.

Shoulberg, who wrote “The Good Catholic” in memory of his late father as a story patterned after his parents’ relationship, admitted death occupies his mind these days.

“It’s the thing that keeps me up at night,” he said, “and I can’t afford therapy.

“I’m writing about it right now because that’s what I’m doing ... maybe soon I’ll be writing a move about singing hotdogs.”

Spicer was asked if he and the others would be seen soon in one of those “if not for IU” commercials about successful graduates.

He then told the group he had returned to his roots, talking to Greencastle High School students earlier in the day.

“They asked me ‘who were some of the famous actors you’ve worked with?’” he said.