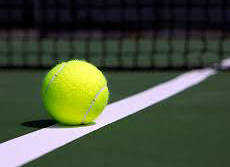 CRAWFORDSVILLE – South Putnam’s Eagles won both doubles matches in their first-ever regional appearance, and won the first set in two of the three singles matches before being defeated in all three matches.

South Putnam’s Austin Arnold and Tanner Pistelli at No. 1 doubles and Jared Seidler and Noah Emmerich at No. 2 doubles both won in straight sets.

“They both made quick work of it, playing some really good tennis,” SP coach Johnny Briones said. “We will greatly miss No. 2 doubles [the only seniors to play on Tuesday]. We can’t thank them enough for all they’ve contributed to the tennis team.

“It will be a big challenge for the rest of the players to fill their spots.”

Arnold and Pistelli will continue to advance in the No. 1 doubles individual competition, and will play on Saturday at Crawfordsville.

“[No. 3 singles player] Garrett Heavin gave his best effort, but fell to an extremely talented player, undoubtedly the best player on the Crawfordsville team,” Briones said. “Our No. 1 and 2 singles started out extremely well; both lost the second set to split sets. They couldn’t quite get it back together.”

Thomas Fanning at No. 1 singles and Ty VanSickle at No. 2 singles also drew praise from their coach.

“I am extremely proud of their effort, as they fought to win every point,” Briones said.

The Eagles won their first-ever sectional title in tennis, and Briones enjoyed every minute.

“I can’t say enough about this season,” he said. “Every match was exciting, and these young men are a great group of guys to be around. I am proud to have brought to the school its first sectional championship, and I’m looking forward to the future of tennis at SPHS.”

Briones and his team were thankful for the strong support received from many different groups of people.

“I can’t say enough about the support we have received from administrators, faculty/staff and the community,” he said. “We have the best parental support and I can’t thank them enough for raising such wonderful young men. I’d also like to thank my wife and children for being such great supporters.”

• Greencastle advances to finals – Greencastle’s No. 6-ranked boys’ soccer team won its semifinal games on Monday and Wednesday in the Sullivan Sectional, earning the Tiger Cubs a spot in the sectional championship match at 2 p.m. on Saturday against West Vigo.

The Vikings defeated Sullivan 3-1 in the other Wednesday night semifinal.

The Tiger Cubs defeated South Vermillion 10-0 on Monday and topped Northview 3-0 on Wednesday, improving their record to 15-1-2.

Greencastle scored six first-half goals to take a commanding early lead against South Vermillion, adding four more goals after intermission. Against Northview, the Tiger Cubs got two goals in the first half and added another in the second half.

• Greencastle 8, Monrovia 0 (girls) – The Tiger Cubs shut out Monrovia 8-0 on Tuesday in a quarterfinal sectional match at Southmont, and beat Southmont 4-0 on Thursday night to reach Saturday’s championship.

The Cubs will meet the winner of Thursday’s late match between Cascade and Southmont at 7 p.m. on Saturday at Southmont.

Erin Thomas had five goals for the Lady Cubs against Monrovia, while Kennedy Trigg added two and Sydney Doan scored a goal on a header into the net.

The Tiger Cubs met South Vermillion on Thursday night for the right to advance to Saturday’s 7 p.m. championship match against the winner of the other semifinal match between

• South Vermillion 4, North Putnam 3 (girls) – The Cougars held a 2-1 halftime lead, but South Vermillion took advantage of penalty kick opportunities to escape with the quarterfinal win in the Southmont Sectional on Tuesday.

Two second-half fouls inside the penalty area gave South Vermillion two penalty kicks, which they converted to take a 3-2 lead.

The Lady Cougars tied the score 3-3 late in the match on Fry’s second goal of the game. South Vermillion scored the game winning goal in the final minute to record the victory.

• Clovers split finales – Cloverdale lost to Indian Creek and defeated Eminence this week to close out the regular season prior to Thursday’s Western Indiana Conference crossover match against Greencastle.

Indian Creek, the East Division champions in the Western Indiana Conference, came back from a 2-0 deficit to defeat the Clovers on Monday. Cloverdale won the first two sets by scores of 26-24 and 25-15, before the Braves won the final three by scores of 25-16, 25-18 and 15-10.

For the two matches, Tori Combs had 16 kills and six blocks, while Kenzie Stoltz had 17 kills and eight aces, Hannah Rady had five aces and 42 assists, Hailey Thomas had 44 digs and Justyce Monnett added 14 kills

• Fountain Central 3, North Putnam 1 – The Cougars won the first set 25-23, but dropped the next three to the Mustangs.