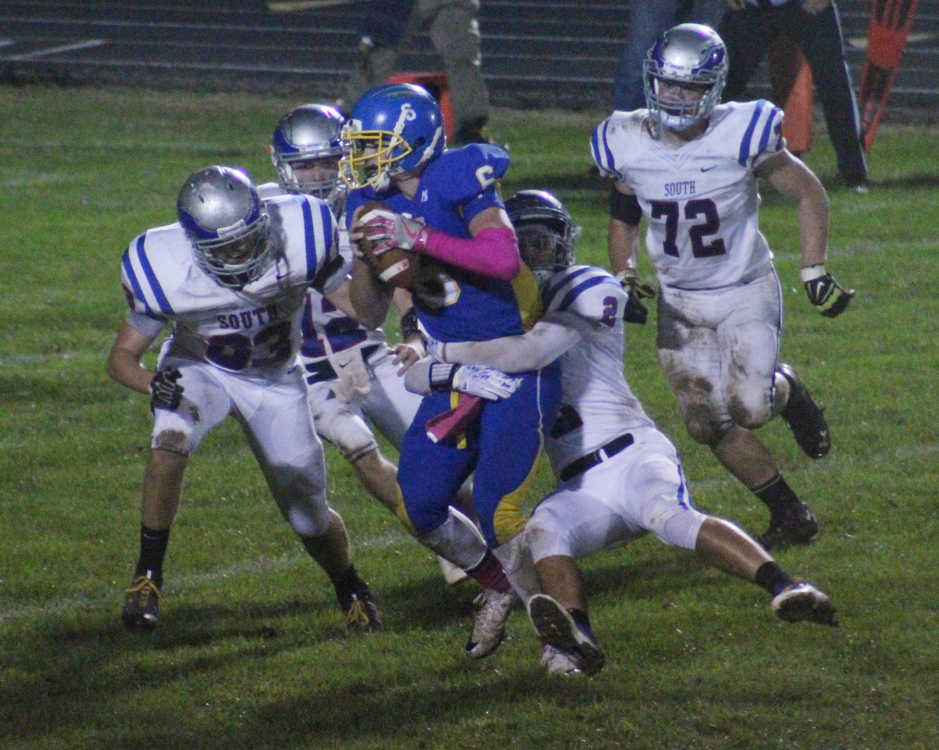 NASHVILLE — For two teams nicknamed “Eagles,” it shouldn’t have been surprising that they combined to throw the ball a combined total of 59 times on Friday night.

South Putnam’s Eagles got on the scoreboard first and last, but the Brown County Eagles used a 21-point outburst in the second quarter to break the game open in a 28-12 victory to close out the regular season.

With the win, Brown County claimed 11th place in the Western Indiana Conference while South Putnam finished in 12th.

After a scoreless first quarter in which neither team was able to muster much offense, South Putnam opened the aerial show first on its first drive of the second quarter.

Brown County missed a field goal on the first play of the second period, and on the very next play SP quarterback Christian Zeffel handed the ball off and took a return pitchout to start a flea-flicker play. Zeffel launched a perfect strike to Jon Hodge, who carried the ball deep into Brown County territory.

On the next play, Zeffel took off running around the right side of the field and scored from 24 yards out just 40 seconds into the second period for a 6-0 lead.

Brown County sophomore quarterback Noah Carter completed a pair of long passes to Griffin Kelly on the ensuing drive to get his team deep into South Putnam territory, before being stopped on downs.

South Putnam didn’t get a first down, and a bad snap on the punt attempt gave Brown County the ball right back.

Carter hit running back Justin Burns on an 18-yard TD pass on the second play to put Brown County ahead to stay at 7-6 with 5:51 left in the half.

South Putnam’s next two drives ended on a punt and a lost fumble, while Carter hit Devon Smith-Harden on a 9-yard TD pass and ran for a 1-yard score to make it 28-6 at the half.

“We showed some signs of progress, but had a few key plays that hurt us,” South Putnam coach Nathan Aker said. “A dropped ball here, a penalty there, and some missed coverages at time. We can’t really overcome from the penalties, and we had a few of those.”

Carter used a big package of plays from the shotgun formation that were mostly slants running through the middle of the field.

Aker acknowledged that such a tactic is difficult to defend in high school football.

“They have a lot of athletes in space, and they are hard to defend,” Aker said. “They have some talented receivers who can run routes well and catch the ball. The quarterback keeps things alive really well, too.”

Brown County scored the only touchdown of the third period on a 23-yard run by Carter, while South Putnam added its final score in the final minute on a 15-yard pass from Zeffel to freshman Dru Teipen.

“I was proud in the second half that we played to the very last second,” said Aker, whose team fell to 1-8 and lost its eighth straight game. “You always worry about the spirit of the team, but our effort in the second half showed this team is never going to quit. We made some adjustments at the half that helped, and the kids came out hitting. They really showed me a lot.”

Zeffel completed 10 of 25 passes for 176 yards, with Dalton Scott hauling in four of those for 34 yards.

Things don’t get any easier for South Putnam, as the Eagles will open sectional play on Friday by hosting 8-1 Covenant Christian.

“We’re going to give it everything we have,” Aker said. “They haven’t played through the WIC like we have, and we think the conference schedule will have us ready.”