CLOVERDALE Ś It was a sight to see in Cloverdale Friday night as the Clovers hoisted the county bucket after knocking off the North Putnam Cougars 23-19 for the first time since 2004.

The Clovers (4-5, 3-2 WIC East) finished 0-3 against county teams in the regular season but all were within reach. Coach Tom Winders felt if his team had one more shot, they could pull of the victory. They did just that on Friday and in the first half it was not even close.

ōIt feels outstanding,ö Clover coach Tom Winders said after his teamÆs first victory over another Putnam County team since 2010, ōI couldnÆt be more proud of these boys. What a way to go out for the seniors. ItÆs phenomenal.ö

North Putnam (4-5, 3-2 WIC West) had nothing going for it early on. The only good thing was a fumbled punt by junior Clover Jake Wilkes in the first quarter that was recovered by senior Dillon Binnion. The Clovers forced a three-and-out and were pinned inside the 10-yard line after a punt. 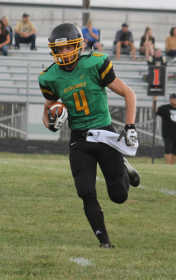 Cloverdale senior Tyler Kaeff, shown here earlier in the season, had a big game in the CloversÆ upset of North Putnam Friday night, rushing for two touchdowns, including a 94-yarder.
Banner Graphic/JARED JERNAGAN

But senior Tyler Kaeff quickly took care of that field position, rambling 94 yards for a touchdown on the first play to put the Clovers up 7-0.

Cloverdale forced another three-and-out on the next Cougar possession and it ended with disaster and great field position for the Clovers. A bad snap left senior James Upleger to pick the ball up and run with it for a loss of seven yards. This gave the ball to the Clovers at the Cougar 30-yard line. Kaeff scored his second touchdown of the night a few plays later on a one-yard carry.

The night only got rougher for the Cougars on the next Clover possession. It was fourth down and two yards to go at the Cougar 39-yard line and the Clovers decided to go for it. Junior quarterback Parker Watts fumbled the snap and the ball rolled loose for several yards along the line of scrimmage. He finally picked it up and ran around an open left side for 37 yards.

Trey Henry punched the ball in on the next play for the Clovers after the Watts run. The extra point, also kicked by Henry, missed wide left.

Rushing the ball has been an issue for the Clovers all season long. The line of scrimmage has not held well, but that was not the case Friday. They had 195 rushing yards in the first half alone before finishing the night with 264.

Big drives helped limit the possessions for the Cougars in the first half. The biggest Clover drive was the first of the second half, though. The Clovers took 5:34 off the clock before Henry kicked a 34-yard field goal after being injured earlier in the drive. This field goal wound up being the difference.

Everyone knew the Cougars would score. It was just a matter of when and it did not take long as Gage Bell caught an 80-yard pass from Hayden Rudes. The conversion run by Ethan Christy was no good to make it 23-6 going into the fourth quarter. That was big because it kept it a three-possession game.

The Cougars scored again on their next possession after stopping the Clovers. This time Rudes threw to Binnion for a 4-yard score and made it a two-possession game.

North PutnamÆs defense did the job on the next possession, forcing a three-and-out. The Cougars then blocked HenryÆs punt and took over in Clover territory at the 29.

After converting a fourth down the Cougars were faced with another fourth down, this time at the two-yard line. Rudes converted for the score with a quarterback keeper. The extra point was blocked and forced North Putnam to score a touchdown if it wanted to win.

Cougar Coach Sam Carnes had to use a valuable timeout on the previous possession, so with just over three minutes remaining, the Clovers only needed first downs.

Cloverdale picked up a first down and Carnes with two timeouts had to hold them in his pocket.

Defensively, the Cougars picked it up. The next two plays were stopped behind the line of scrimmage and timeouts were called. Thanks to a Clover penalty, the clock was stopped again, which forced a punt.

With 50 seconds remaining, the Cougars had to go 93 yards after Henry pinned them at the seven with his punt.

Rudes completed a couple of passes to move the ball out to the 30-yard line, but with 10 seconds left he was sacked. The Cougars had no more timeouts and could do nothing but watch the clock run out.

ōWe have coached them boys since the second grade,ö Winders said. ōThe seniors have a lot of heart and they really wanted this game.ö

Rudes was sacked by the Clover defense five times, including four times in the first half. He was also hit several times and forced to overthrow Bell twice in the first half. Bell had been wide open and a catch would resulted in a touchdown both times.

ōOur defense was playing lights out,ö Winders said. ōIÆm proud of the boys, but thatÆs what weÆve hung our hats on all year. The players were flying to the ball and we tried some different blitz packages and it worked.ö

Next Friday will start sectionals and the Cougars will host Tipton at 7 p.m. and the Clovers will travel to Speedway at 7 p.m.