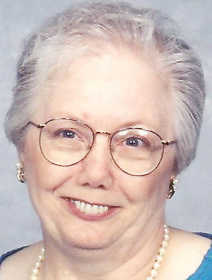 She was preceded in death by her brother, Dale Burger, of South Bend; brother-in-law Joe Brown, Jasonville; brother and sister-in-laws Cecil and Kathleen Nichols, M.G. (Shoat) and Marjorie Nichols, Earl and Nellie, Arvil and Ruth Nichols, Samuel and Luie (Nichols) Reeves, all of Belle Union/Fillmore.

After moving to Jasonville at an early age, Nora graduated from Midland High School in 1950.

Shortly after graduation, she moved to Indianapolis and worked several part time jobs in downtown Indy before landing a full-time job at Aero Mayflower Moving Corp. where she worked in the Revenue Accounting Department until her retirement in 1988.

While living in Indianapolis, she met her future husband, Henry C. (Nick) Nichols, and they were married on Nov. 22, 1963.

They eventually moved to Fillmore, and farmed there until Henry's death on Oct. 14, 1987.

Nora is survived by her only child, a daughter, Lisa A. Duggan (Tim) of Greencastle. She is also survived by her grandsons, Timothy "Scott" Duggan II and David Henry Nichols Duggan (Nick), both at home. Her sister, Delores Brown, Jasonville, also survives, as well as her sister-in-law Shirley Burger, South Bend. Several dear nieces and nephews also survive.

Visitation will be held on Saturday, Oct. 21 in the Bousley Funeral Home in Coatesville from 10 a.m. to 1 p.m. Services will be conducted at 1 p.m. with Rev. Bill Dawson officiating.