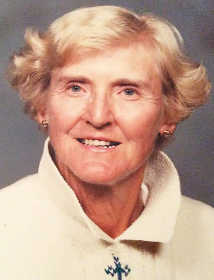 Betty Ann was born on May 14, 1925 in Bainbridge. She grew up on the Judy farm north and west of Greencastle in Putnam County.

One wonderful memory of her childhood was tap dancing to "Happy Days are Here Again" for President Franklin Delano Roosevelt at a political rally in Indianapolis on Sept. 5, 1936.

With World War II raging, she married Howard on May 15, 1942 before he went into the service.

Upon graduating from Greencastle High School on May 28, 1943, she joined her husband during his Army Air Corps and Aviation Cadet training at Maxwell Field, North Carolina State, and Sioux Falls AFB, South Dakota.

After the war, Betty and Howard moved back to Greencastle and became small business owners with coin laundries and water conditioning as their primary businesses.

When asked by DePauw Athletic Director Ted Katula to become the women's golf team assistant coach, she proudly accepted and served from the late 1980s through early 2000s.

Betty is a member of Pi Beta Phi and served as Indiana Epsilon chapter adviser through the '70s, '80s and '90s.

Saint Andrews was an integral part of her life where she served in many roles and always participated in the church's many activities. She was a member of Tri Kappa and Over the Tea Cups. To fulfill her wishes as a three-time cancer survivor, her remains were donated to the Anatomical Education Program at the Indiana University School of Medicine.

A memorial celebration for Betty Ann will be held at Saint Andrews Episcopal Church, 520 E. Seminary St., Greencastle, on Saturday, Oct. 28 at 5 p.m.

In lieu of flowers, memorial donations may be made to Saint Andrews Episcopal Church.