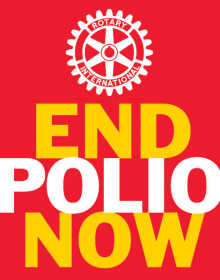 The road to eradicating polio has been a long and difficult one, with Rotary leading the fight since 1985. Going from nearly 350,000 cases in 1988 to just 10 so far this year has required time, money, dedication, and innovation from thousands of people who are working to end the disease.

Here are six things you may not know about the fight to end polio:

1. Ice cream factories in Syria are helping by freezing the ice packs that health workers use to keep the polio vaccine cold during immunization campaigns.

2. Celebrities have become ambassadors in our fight to end the disease.

3. Health workers and Rotary volunteers have climbed mountains, crossed deserts, and sailed to remote islands, risking their lives to vaccinate children against this disease. Rotary has funded more than 1,500 motorbikes and 6,700 other vehicles, as well as 17 boats, to make those journeys. Vaccinators have even traveled on the backs of elephants, donkeys, and camels to immunize children in remote areas.

4. In Pakistan, the polio program emphasizes hiring local female vaccinators and monitors. More than 21,000 vaccinators, 83 percent of whom are women, are achieving the highest immunization coverage rates in the country’s history.

5. Thanks to the efforts of Rotary and its partners, more than 16 million people who otherwise might have been paralyzed are walking today. In all, more than 2.5 billion children have been vaccinated since 1988.

6. On the heels of the success of a 2-to-1 matching grant, Rotary and the Bill and Melinda Gates Foundation announced an increase combined pledge of up to $450 million at the Rotary International Convention in Atlanta. Rotary’s new goal is to contributing $50 million per year over three years. With a 2-to-1 match the Gates Foundation’s contribution will increase to $300 million if Rotary reaches its fundraising target.

If you would like to assist the club with the pledge, you may contact Co-Foundation Chairmen Jenny Sullivan 653-3171 or Ginger Scott at 655-2333 or drop off a donation at Eitel’s & Co. Florist or Wabash Capital checks made payable to the Greencastle Rotary Club.