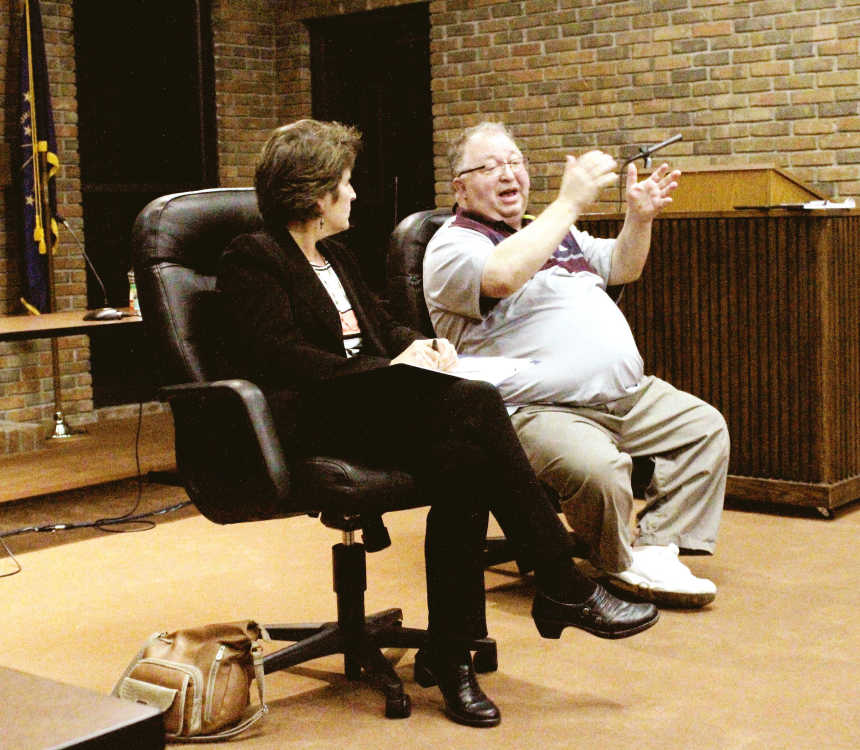 For starters, the new Community Conversations series co-sponsored by the League of Women Voters and the Putnam County Public Library, didn’t exactly cover much in the way of new ground or shed any real light on solutions to local problems.

But it did perhaps remind city officials and local residents alike that some of those issues are still hanging around and are still very much in need of attention.

Issues like homelessness and poverty, alarming drug use, bullying, traffic problems and even the desire for a local YMCA to name a few were discussed at the first series session at City Hall earlier this week.

Thirty persons were in attendance as City Council members Adam Cohen (First Ward) and Stacie Langdon (Second Ward) first explained why they were interested in being on the City Council and then took questions from the audience.

Cohen, who is president of the City Council, said, “There is no training for this. You have to learn it on the fly.”

Regardless, he said, “Neither one is going anywhere.”

Langdon, meanwhile, said she moved to Greencastle 15 years ago and has fallen in love with the city.

“I’m on the Council because I enjoy the city and I enjoy this kind of work,” she said. “What an exciting time to be here.

“I feel we’re on the brink of being something very special.”

Both Cohen and Langdon noted the irony in the availability of jobs in Greencastle.

“When I came on the Council,“ Cohen said, “we didn’t have enough jobs. Now we don’t have enough people for the jobs we’ve got. We’ve got help wanted signs everywhere.”

Langdon said, “We’ve got jobs coming out our ears. But it’s a challenge to get people to move to Greencastle (for these jobs).”

Ann Newton of the League of Women Voters raised the homelessness issue, explaining that it takes $12 an hour for a living wage in Greencastle and that 17 percent of children live in poverty locally.

The city needs more housing, Cohen said, and more assessed value, noted that the city has done comparison studies of cities its size on assessed value and what it pays its employees, “and we’re pretty much at the bottom.”

In helping deal with the drug issue, Cohen said he would like to see the city acquire a second K9 officer to go with Cain, the K9 officer that has so successfully teamed with Officer Kyle Lee in drug cases.

Langdon, meanwhile, told of taking a six-hour ride-along with GPD officers as they found drugs during searches and saturation patrols of several neighborhood hotspots.

On patrol they came upon a homeless man lying in the culvert alongside Burger King on Indianapolis Road on what was a quite chilly night.

“Because there’s no men’s shelter, all we could do was give him blankets,” the councilor said. “I thought about him all weekend.”

On a positive note, the City Council members have seen conceptual layouts for the proposed YMCA building as the project marches toward fruition.

“We don’t have the land yet,” Cohen said of undisclosed site that would reportedly provide space for the project as designed and room for potential expansion.

The community center would be run by the Wabash Valley YMCA and include a walking track, workout space, basketball court, rooms available for events like bridal showers and meetings and more if ultimately approved. It would not, however, have a swimming pool, Cohen confirmed.

Traffic issues were raised by local resident Miranda Brown, who said she witnessed a pedestrian walk out into the street at Vine and Franklin streets and about get hit because she did not realize it was not a four-way stop intersection.

She suggested that Greencastle has more than its share of intersections that seem to defy logic and exist as a two-way or even a three-way stop. And many also have visibility issues at the corners. She urged city officials to do something about those.

Others brought up specifics like South Jackson Street where the speed limits goes from 20 mph at Asbury Towers to 30 just south of there, back to 20 within a very short period.

And, of course, the ever-popular difficulty of navigating around the courthouse square area was raised as well.

The area was never designed, Mayor Bill Dory noted, for “semi trucks with 53-foot-long trailers to try and maneuver around our courthouse square.”

“Some of us don’t like the rules either,” he assured the audience, “but we have to operate within the rules.”

Fourth Ward City Councilman Tyler Wade was scheduled to be on the panel but was out of town on business.

The second program in the Community Conversations series is scheduled for Tuesday, Nov. 14 at 6:30 p.m. at the Putnam County Public Library. It will feature Putnam County Commissioner Rick Woodall.