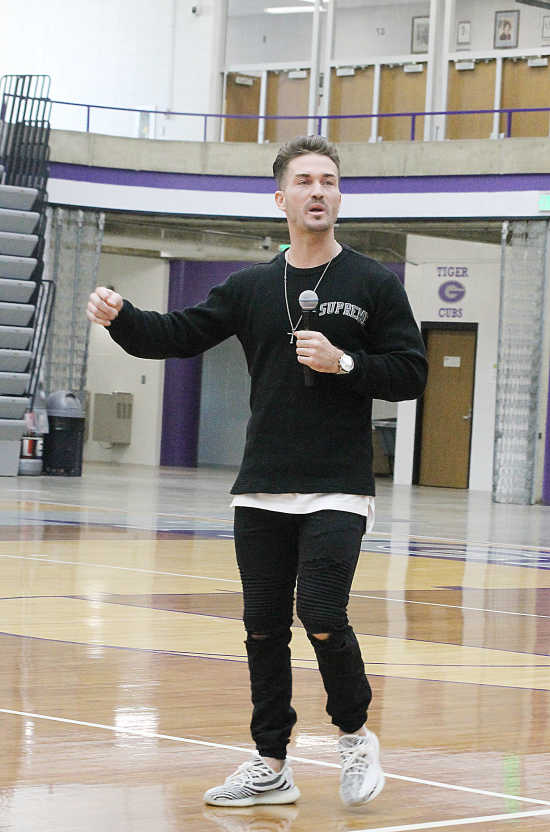 “One choice can change the rest of your life,” Hoffman said.

It was a prominent message Thursday morning at McAnally Center as Hoffman spoke to 1,400 eighth- through 10th-grade students from Cloverdale, Greencastle, North Putnam, South Putnam and Eminence in an event sponsored by the Putnam County Youth Development Commission.

For Hoffman, that choice came in 2004 when he committed a home invasion armed robbery. His life spiraled further out of control from there until he was sent to prison for two years in 2007.

It was in prison that Hoffman began to turn his life around, ultimately returning to the top level of BMX racing before an injury ended his pro career.

Even with his dreams of going to the Olympics behind him, Hoffman kept his demons at bay, reaching the 2016 Rio Olympics as the coach of women’s BMX pro Brooke Crain.

On Thursday, Hoffman took the students further back, starting in elementary school, when he discovered he was good at sports and therefore didn’t have to work as hard as the kids around him.

As life went on, Hoffman didn’t want to work for things. Any sport he picked up, he quickly excelled. That went for basketball, volleyball and eventually BMX, which landed him on the cover of a national magazine when he was a senior in high school.

In three year’s time, Hoffman went from the cover of that magazine to robbing a house at gunpoint. That was the portion of his journey he wanted the kids to understand.

Instead, Hoffman focused on some of the factors that led him to the choices he made — an aversion to hard work, social anxiety, suicidal thoughts — and how those choices, in turn, affected the rest of his life.

Shortly after high school, a good computer job fell through for Hoffman and he moved back home and started partying with his friends. It started with marijuana, a drug that’s accepted as fairly tame by most of society at this point.

Instead, Hoffman looks back and sees it as the gateway drug many claim it to be. He was scared of smoking it the first time but afterward he was willing to try anything.

“There’s a doorway that exists,” Hoffman said. “When you walk through it, you don’t get to choose.

“I know more people that died from overdose than got clean and sober,” he added.

While not specifically listing every drug he had tried, Hoffman summed his past use by saying he had tried “everything but LSD.”

That lack of control led Hoffman to just about anything he could get his hands on, including pharamaceuticals.

“The orange bottle is just a different packaging,” Hoffman said. “It’s the same stuff that comes from the cartels,” adding that it’s often stronger.

And so, in need of their next high, Hoffman and his co-defendant decided to rob a friend’s mother at gunpoint. After they successfully got away, Hoffman decided not to do it again.

However, when the other man continued with the robberies, he was caught. This eventually led police back to Hoffman.

As “white kids from the right part of town,” Hoffman said they got special treatment, without the prison time they deserved. Unfortunately, a serious infection led him back to Vicodin and walking out on his family.

“The next two years of my life were hell,” Hoffman said, “and I’m talking about a hell I can’t even tell you about.”

A drug charge eventually landed Hoffman in prison in 2007. He was fortunate in this respect, as his best friend Nate died of an overdose while Hoffman was in prison, sober and beginning to rebuild his life.

He began by what he calls a “micro process.” One of Hoffman’s goals was to get back on the BMX bike and get to the Olympics. It all started with baby steps.

“I told myself I need to learn how to brush my teeth every day if I want to go to the Olympics,” Hoffman said.

From tooth brushing, it moved on to making his bed, to organizing his few possessions.

Eventually, Hoffman set four major goals for himself upon release. He wanted to become a professional athlete, become a public speaker, start a non-profit organization and make the Olympics.

He began the check things off the list upon release. Within five months, he was in his first professional race. Meanwhile, he had his first public speaking engagement with a Fellowship of Christian Athletes group.

The knee injury caused the Olympic dream to take a different turn, but Hoffman’s work with Crain still got him to Rio. In Rio, he described being overcome with emotion at simply touching down, and again later when he had the chance to watch Usain Bolt and Justin Gatlin in the track 100-meter final

“Then when I get the chance to do something really special, it’s overwhelming.”

It’s a joy Hoffman carries with him as he’s on the road speaking. At a certain point, he realized that his life was a gift. Just like his friends, he could have come back through the door on a casket, but he feels the chance to reach others is now his purpose.

“This microphone is the only reason I’m supposed to be alive,” Hoffman said.

Between the speaking, The Freewheel Project, social media and his website www.tonyhoffmanspeaking.com, Hoffman puts his energy into educating others, hoping they can take a lesson from the life he is sharing.

“I walked through a door and couldn’t figure out how to get back throught the other side,” Hoffman said. “There’s only two ways: In a casket or by changing every single thing about your life.”