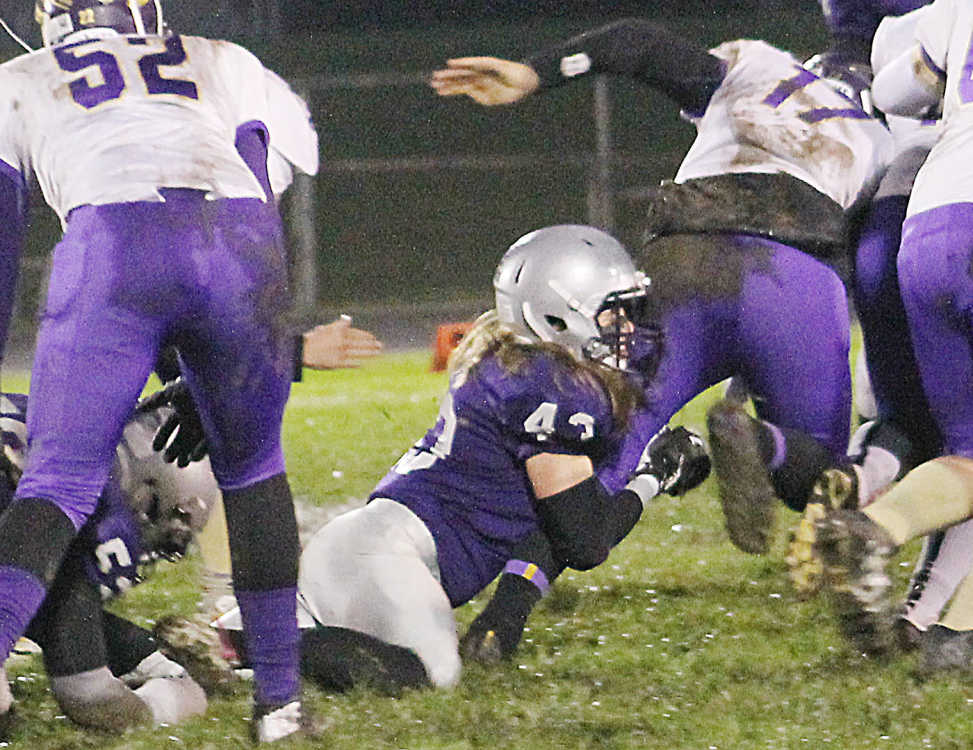 With no score in the game and only 4:10 remaining Friday night, Greencastle’s Damon Moody scored a touchdown from four yards out to help lift the Tiger Cubs over the Sullivan Golden Arrows, 14-0.

It had rained all day Friday in Greencastle, making the field difficult to play on. For Sullivan, which likes to throw the football, it was near impossible as junior quarterback Jack Conner could not plant his feet firmly to make a pass. For the game, he was only 7-of-21 for 126 yards and an interception.

“Sullivan seemed not in their game,” Tiger Cub coach Mike Meyer said. “They were a little out of rhythm, and our kids fed on that.”

Conner fell several times after taking one step, while the Tiger Cubs had a snap go way over the head of punter Alex Costin to add to the problems caused by the weather.

Greencastle had the only scoring opportunity in the first half with 10 seconds remaining, but Evan Crowe’s 32-yard field goal was blocked.

Sullivan had the ball to start the third quarter and marched it all the way down to the Tiger Cub 11-yard line. But on a fourth-and-three quarterback draw, Conner was stopped for only a yard gain. Thus a drive that took more than six minutes produced no points.

Greencastle took the ball over on downs and marched it 42 yards into Golden Arrow territory. On a fourth-and-one, Coach Meyer elected to punt. It seemed a questionable call the way the Tiger Cubs were moving the ball, but it did not end up hurting them as they forced a fumble on the Golden Arrow 18-yard line.

Greencastle marched it to the one-yard line and was forced to a fourth down. But the play clock went under 10 and the Cubs were still in the huddle. They ended up fumbling the snap, but the illegal procedure penalty was declined and Sullivan took over.

Senior defensive back Abe Wade made the biggest defensive play of the night on a fourth down and five. Conner threw to his favorite target, Dakota Caton, who thought he had a catch. Wade came in to make him bobble the ball late and he never gained control before going out of bounds. The call was incomplete and the Tigers took over in Sullivan territory at the 44-yard line in a still-scoreless game.

A couple of plays later Moody had a 24-yard run down to the four that set up his first touchdown run on the next play.

With a little breathing room, the Tiger Cubs could give cushion on defense and not let the big play bite them. It worked out when Conner tried to make a long pass but Dakota Campbell was there to make a big interception. He returned it 21 yards to the Golden Arrow 45-yard line.

The interception was a big confidence booster for Campbell. Last week against Brown County he fumbled three times on special teams and dropped multiple passes. He made his redemption known on Friday.

“He (Campbell) had a great kickoff return as well,” Meyer said. “You saw people step up. Each game is getting bigger and it’s going to be the same thing next weekend.”

On the second play of the drive, Moody ran it in from 41 yards out with 2:58 remaining to seal the game and move Greencastle (7-4) into a sectional championship at undefeated Danville (11-0) next Friday.

In all Moody had 212 yards rushing on 35 carries. The offensive line did a great job leading the way especially late. In the fourth quarter alone he had seven carries of more than eight yards, including ones of 18, 24 and 41 yards. The majority of those came on first downs as the line opened big holes up the middle.

“We did a really good job this week prepping for what they (Sullivan) did to us last time,” Meyer said. “We made some really nice adjustments and we’re just really, really happy with the way the kids played.”

The Tiger Cub defense only gave up 108 rushing yards on 36 carries, getting a big shutout after being beaten by Sullivan 41-10 in the regular season meeting.

Sullivan finishes the season at 9-2.