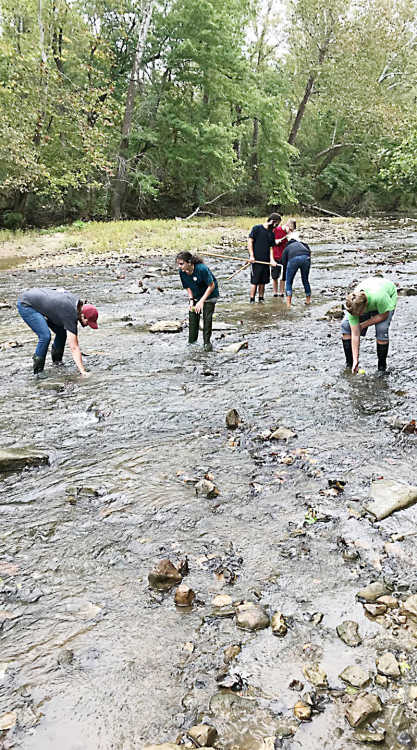 This fall Greencastle Middle School (GMS) had the opportunity once again to assess the health of Big Walnut Creek adjacent the Putnam County Fairgrounds between the Greencastle Water Treatment Plant and the U.S. 231 bridge. Students were able to access Big Walnut Creek to record measurements and follow-up with a health determination back in the classroom.

This joint evaluation effort was led by Stacie Stoffregen of GMS with assistance from Purdue Extension Putnam County staff.

Students were assessing the benthic macro invertebrates, words when broken down mean bottom dwelling, large enough to see visually organisms without spines or backbones. Stream organisms like insects, arthropods and fish live in a stream year around and depending on the type and species have varying degrees of tolerance to pollution.

Typically, a greater number of species (high level of diversity) indicates positive stream health whereas even a large number of a single species would be indicative of poor stream health.

A watershed is a land area that shares a common drainage point. Thus smaller watersheds collectively make up larger watersheds. Everyone has a watershed address that can be likened somewhat to an internet address. For example at the Putnam County Fairgrounds, the watershed address is Big Walnut Creek, Eel River, West Fork White River, Wabash River, Ohio River, Mississippi River, Gulf of Mexico.

Given the knowledge about stream organisms, these youth set out to answer the question of whether or not the Big Walnut Creek watershed above Greencastle is healthy. One might question what is the application of determining stream health? Since annually planted cropland of mostly corn and soybean totals 13 million acres and occupies more than half of Indiana’s 23 million acres, agriculture often has a finger pointed at its industry for being detrimental to water quality.

Could it be that farmers collectively in a watershed, who comprise about one percent of the general population nationally, are negatively impacting watersheds, thereby negatively impacting streams, lakes and rivers as many non-farm residents so often assert? Other questions might include the impact on water quality from faulty septic systems, use of lawn chemicals, wildlife or livestock in streams, etc.

As students went about biological stream assessment activities, they were learning beneficial applications of accounting, identification and classification. The middle school students also applied math and science knowledge like geometric principles, physical properties like water/air temperatures and chemical testing of dissolved oxygen, nitrate and phosphorus levels. Using all of these data collected in the assessment phase, students concluded the process by utilizing scientific decision making skills.

Now drum roll…what were the final conclusions of the students? Big Walnut Creek near the Putnam County Fairgrounds exhibited indicators of great stream health and healthy watersheds upstream. Numerous organism species that are intolerant of pollution were found! Applying the student’s conclusion to the specific watershed, it would appear that agriculture as the primary land use of the land area (watershed) upstream is not having a negative impact on the stream.

Visit our homepage at www.extension.purdue.edu/putnam or you can contact the local Purdue Extension Office by calling 765-653-8411 for more information regarding this week’s column topic or to RSVP for upcoming events.

It is always best to call first to assure items are ready when you arrive and to RSVP for programs. While many publications are free, some do have a fee. All times listed are Eastern Time.