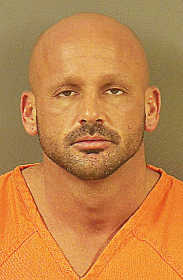 FILLMORE — A 33-year-old man is lodged at the Putnam County Jail after a Friday domestic incident turned into his arrest on seven counts, five of them felonies.

Official charges remain forthcoming from the Putnam County Prosecutors Office, therefore no probable cause affidavit is yet available on the Friday incident.

However, after 7 p.m. on Friday, police scanner traffic began indicating an incident or series of incidents on Westwood Road in Fillmore.

Police spoke of an alleged victim in one of the homes on Westwood Road in Fillmore (past court listings indicate an address of 114 Westwood for Barger), an alleged assailant who was on the run, a “deliberate head-on crash” and, initially, an inability to locate the man on the run.

Barger was eventually located and taken into custody at 7:43 p.m.

Due to the ongoing investigation, treatment of injuries, or both, Barger was not booked in the Putnam County Jail until 2:38 a.m. Saturday.

Barger’s criminal history includes two convictions for driving while intoxicated, the second of which garnered a one-year stint with the Indiana Department of Correction.

He also has a past conviction for resisting law enforcement.

Further details will be available if and when the prosecutor’s office files formal charges against Barger.