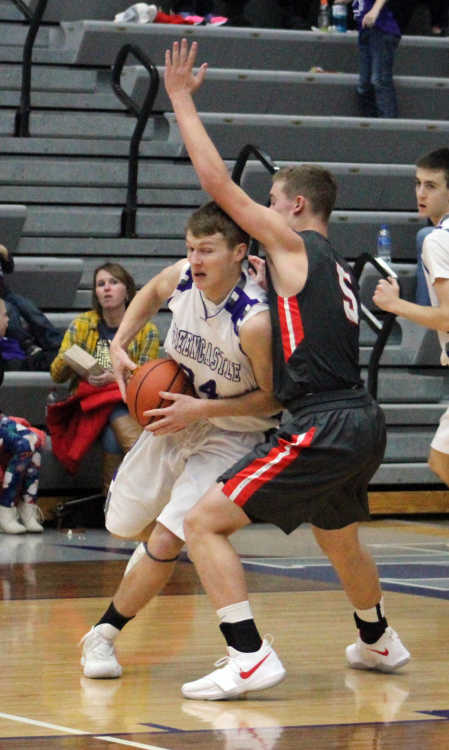 Jack Hutcheson of Greencastle drives to the basket against Southmont on Saturday night.
Banner Graphic/JOEY BENNETT

Southmont, playing its second game under interim head coach Jake Turner after the resignation of Jon Sparks earlier in the week, came out inspired and dominated the first period by a 12-7 margin.

The Mounties increased their lead to 21-11 with 3:32 left in the first half, but three straight Southmont treys — two from Cam Chadd and one from Justin Howard — gave the visitors a 27-20 halftime lead.

Greencastle hit just 7 of 19 shots in the first half, and leading scorer Colin York was held scoreless due to tough defense applied by several different Mountie players.

Freshman Brody Whitaker stepped up in the first half and scored 12 of his game-high 25 points to keep his team close.

Greencastle hung tough and cut the Southmont lead to 36-33 on a Gavin Bollman basket with 2:46 left in the third period.

Southmont responded, though, as Chadd hit a basket and a free throw and Cole Roach hit a trey for a 42-33 advantage.

Jack Hutcheson and Bollman combined to hit three free throws in the final 1:34 of the period to cut the gap to 42-36 at the final stop.

Southmont still led 47-40 when York got untracked, hitting a basket with 4:26 to play followed by a trey. Bollman scored on a layup thanks to a nice pass from Andrew York, and Greencastle cut the gap to 49-47 with 2:57 left.

No one scored again for more than two minutes, when Southmont’s Reese VanCleave hit a free throw for his team’s final point.

Whitaker was fouled and hit a pair of free throws with 7.6 points left to cut the gap to 50-49.

Greencastle got what it wanted, fouling Southmont and having the Mounties to miss both free throws with 3.9 seconds left.

Whitaker’s halfcourt shot was off target, and the Tiger Cubs fell for the second time this season.

Greencastle coach Bryce Rector was proud of his team’s effort, particularly in light of York’s off night shooting.

“Southmont did a couple of things that we didn’t take advantage, but we got Colin shots that he normally hits,” Rector said. “It was just wasn’t there, and that happens. I’m proud of the fact that we had a chance to win it at the end.”

Rector was impressed with how Southmont handled a difficult situation with adapting to a new coach in a short period of time.

“They have handled their adversity well,” he said. “They came out, especially in the first quarter, and did some good things to start the game. We didn’t handle it well to start, but we handled it well throughout the game and battled back.”

Whitaker scored more than half of his team’s points, with Bollman adding 14 points and 13 rebounds for his fourth double-double of the young season.

“A loss is a loss,” Rector said, “but we can take some positives away from tonight.”