Medical episode causes driver to crash, strike semi on I-70 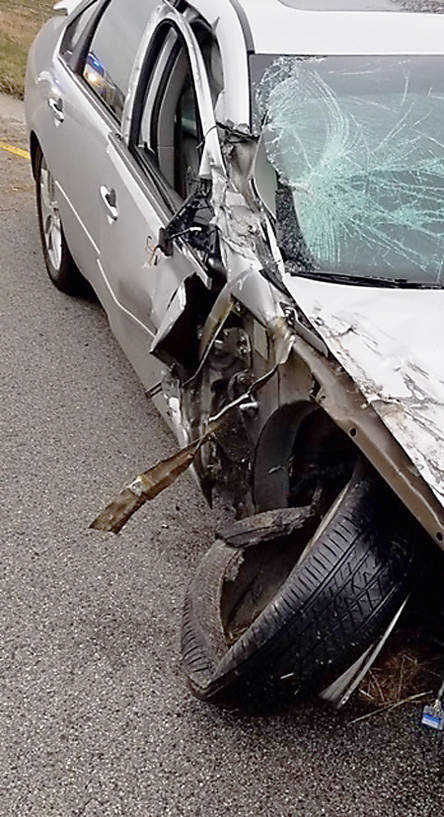 A silver Chevrolet Impala, driven by Robin Blansett, 52, Farmersburg, shows significant damage following a Friday morning accident at the 34-mile marker of westbound Interstate 70 in Putnam County. The mishap was blamed on an apparent medical issue that reportedly caused the driver to operate the car erratically. State Police photo

PUTNAMVILLE -- Just before 10 a.m. Friday, Indiana State Police responded to a one-vehicle crash in the westbound lanes of Interstate 70 near the 34-mile marker in western Putnam County, seven miles west of Cloverdale.

After striking the cables, the Impala re-entered the roadway and struck a westbound 2003 Kenworth tractor pulling a semi-trailer and driven by Daniel Foster, 58, of Joplin, Mo., State Police said.

Blansett was transported to St. Vincent Clay Hospital at Brazil for treatment of an apparent medical issue. She was belted and was the recipient of airbag deployment, thus sustaining no injuries from the crash.

Foster was neither injured nor cited as a result of the accident.

INDOT workers in the area had notified ISP about the silver Impala operating erratically before the crash.

Commercial Vehicle Enforcement Trooper Yan Dravigne was in the area and attempting to locate the vehicle. A few minutes later, and before Dravigne could locate the suspect vehicle, ISP Region V Dispatch Center was notified of the crash.