It’s a blue Christmas for trucker Dale Smith too 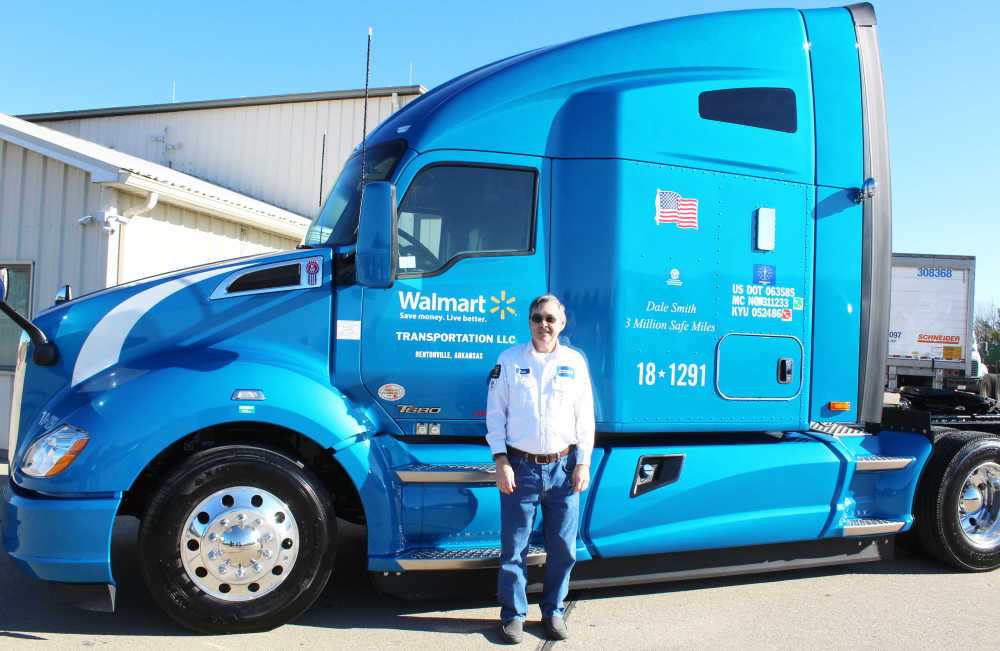 With three million accident-free miles now under his belt, Dale Smith will keep on trucking in his new blue Kenworth semi as he continues to drive out of the Walmart Transportation Center in Greencastle.
Banner Graphic/Eric Bernsee

Elvis Presley has got nothing on Dale Smith.

Elvis may have legendarily crooned about having “a blue Christmas without you” and being “so blue just thinking about you.”

But Smith is now humming along in a beautiful big, bright blue Christmas present all his own -- a Kenworth truck presented to him Wednesday afternoon emblematic of driving three million accident-free miles for the Greencastle Walmart Transportation Department. 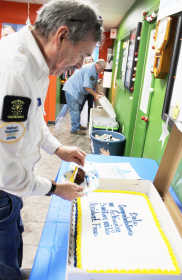 Smith was presented with the new blue truck, emblematic of the three-million-mile milestone for Walmart, at a special luncheon in his honor Wednesday at the transportation hub, where he cuts the cake and poses for photos with his shiny new ride.
Banner Graphic/Eric Bernsee

Smith, who drives about 125,000 miles a year for Walmart, reached the three-million mark last July, becoming just the third Greencastle-based driver in the 26-year history of the transportation center to reach that plateau.

He joins Jim Stone, who accomplished the feat in January 2017, and Mike Allred, who turned the trick in July 2012 and is still driving, apparently intent on shooting for four million accident-free miles.

That three-million-mile achievement amounts to the equivalent of going to the moon and back more than six times without incident for Smith, who doesn’t plan to follow in the ambitious footsteps of Allred. 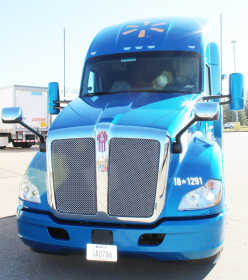 “I’m 68,” Smith said Wednesday afternoon following a steak dinner and cake celebration in his honor, “so I won’t be doing any more millions. But it’ll be fun to finish out my career in that truck.”

That truck is a brand new blue Kenworth only Smith will drive that features “about anything you can think of,” but especially offers an automatic transmission and luxury seating that is already calling Smith’s name.

“My back feels better already,” he told cohorts as he jingled his keys in front of them in the break room while noting he won’t be needing to slide layers of foam under his lean frame to sit on for long hauls any more.

Smith had his choice between a blue Kenworth and a blue Peterbilt (Stone chose a Peterbilt when he complete the three-million-mile circuit).

“Kenworth has been updated a little more recently,” Smith explained, “so I like it a little better. The floor is flat all the way through while the Pete has a little ridge to it.”

Blue and white are, of course, Walmart colors. So when Smith is done driving Big Blue, it will be repainted and go into the regular fleet to be used by one of the other 60 drivers that call the Greencastle transportation hub home.

Smith, who started his Walmart driving career in January 1993, resides in Anderson now and makes the 150-mile round trip to Greencastle just once a week while being gone out on the road the rest of the time.

Through all his many accident-free miles, Smith can recall a couple close calls but nothing that could be considered a preventable mishap.

“I’ve had to dodge a four-wheeler and a few have had to avoid me,” he told the Banner Graphic previously, agreeing that ice and snow are also obviously obstacles to avoid.

And he may have to watch out for those distractions again very shortly.

While checking out how sparkling clean and shiny the truck and even its enormous glimmering tires were upon delivery Wednesday, Smith noted, “I’ve got a feeling I’m going to get it dirty my first trip out to Wisconsin. I keep hearing about some snow up there.”