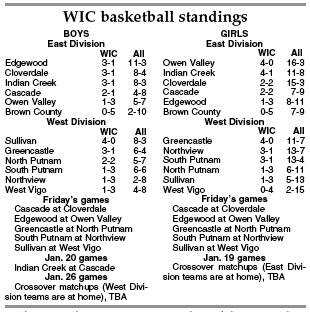 Friday night is the final night of action for all but one game in Western Indiana Conference divisional basketball play.

In the girls’ standings, Greencastle has clinched the West Division title and will play at Owen Valley on Jan. 19 in the league championship game.

Greencastle plays at North Putnam on Friday and Owen Valley hosts Edgewood, but even if the division champs lose they would win a head-to-head tiebreaker over the second-place team.

In the West Division, South Putnam and Northview are tied for second and will break that tie when they meet at Brazil on Friday. Both teams lost to Greencastle.

North Putnam, Sullivan and West Vigo will fill the 4-6 spots based upon Friday’s results.

In the East Division, Indian Creek has completed divisional play at 4-1 and will finish in second place.

Cloverdale and Cascade are tied for third, and will break that tie at Cloverdale on Friday. Edgewood will finish fifth and Brown County will be sixth.

In the boys’ standings, Sullivan will host the championship game on Jan. 26. The Arrows are 4-0 in league play, and hold a tiebreaker edge over potential second-place finishers Greencastle and North Putnam — who play on Friday at Bainbridge.

Sullivan’s opponent is undetermined. Fourth-place Cascade (2-1) plays Cloverdale and Indian Creek — two of the three teams tied for first at 3-1 — in its final two league games.

Edgewood is the other team tied for first, and would win a head-to-head tiebreaker over anyone except Indian Creek — which handed the Mustangs their only WIC defeat.

Ties of more than two teams are broken by a series of tiebreakers starting with fewest points allowed in conference games.