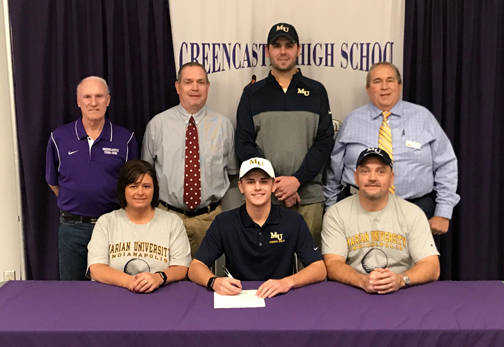 Jake Bennett’s parents, Greg and Robin, are both golfers. He took up the game at an early age.

So, Jake signing a national letter-of-intent on Wednesday to attend the Indianapolis school and play golf seemed meant to be.

“I only took one visit,” Bennett said. “My sister went there, and I knew that was where I wanted to go all along. My junior year, I went in the school in the wintertime and met coach [Stephen] Ford. We got along well, and it was really to decide I wanted to go there.

“I like the Marian area, and the team is good, and I thought it was a good fit.”

Ford likes Bennett’s game, and feels he will be a great addition to the program.

“He’s a nice guy and a good golfer,” he said. “I’ve seen him play a few times now, and it will be good to see him grow as a golfer and a person over the next few years. In the last year, he has gotten a lot better but he still has a lot more room for improvement as well. I’m excited to see that.”

The courses which Marian plays are not surprisingly longer than the ones Bennett and the Tiger Cubs play during their spring season, but Bennett feels he has taken good steps to ease that transition.

“The college courses are definitely longer,” he said. “But I’ve played in a lot of summer tournaments on those longer courses since about sixth grade, and I think playing those will help me when it’s time for college golf.”

“The length of the courses is a lot different,” he noted. “The mid to long irons are something that is going to take an adjustment period for him, but that’s something that we can work on and get better at. I’m big at helping with course management and helping him grow in that direction.

“I’m excited to see him finish his high school season here,” Ford added. “He has a lot of things yet to get done. It always helps when he’s been coached well [by Steve Paquin] like he has been here.

“A coach who can push you at the high school level is great in any sport.”

Putting is another area that Bennett is trying to improve, both for this spring and beyond.

“For college golf, the biggest thing I need to work on is ball striking and consistency, especially with the putter,” he said. “I’ve been working with different putting aids and tools. I’ve watched hours and hours of video on the putting stroke, and I’m going back to the fundamentals of it.

“I’m breaking down my stroke, and trying to revamp it to be consistent every time.”

Paquin has enjoyed having Bennett in his program, and is also looking forward to see what he’s able to accomplish in his final high school campaign.

“He’s been our top player the past two years,” Paquin said. “He was No. 2 his freshman year and progressed on. He made all-conference the past two years, and he was our Most Valuable Player last year. I’m assuming he will be again this year.”

Paquin considers Bennett as a “hard worker” who “loves the game” and will be a good fit in the Marian program.

“He’ll have a lot of success there, and I couldn’t ask for a better kid to work with,” Paquin said. “He’s been a pleasure to work with.

“It’s hard to get a Division I scholarship, because there are so many good golfers and every school doesn’t have a men’s team,” he noted. “The competition we play is not as strong as what Carmel and the bigger schools play, and they play more courses that are tougher and make you better. When we get on that caliber of course, we like to see how our players can adjust to that.”

Paquin agrees with Bennett that putting is an area needing improvement, and notes consistency as another part of the game that he needs to work at improving.

Paquin notes that Bennett has competed in Indiana Golf Association tournaments for several years, and that experience has also helped him to grow.

“He plays all year around,” he said. “We’ve been working inside twice a week since the girls’ season ended [in October], and he also goes to DePauw and works at their indoor facility. He’s been fun to have, and he’s a good leader.

“He helps out the younger players, and he even came out to help out the girls’ players during their season,” Paquin added. “He’s really behind the golf program.”

Paquin and the Cubs are hopeful of qualifying for the state finals as a team, but Bennett could advance as an individual if the team falls short of the top three.

“He’s got the game to go to the state finals,” he said. “It will come down to putting and chipping. The distance is there, the iron play is there. Your short game determines whether you’re going to shoot in the mid-70s or the low-70s.”

The Knights compete well at the national level in the NAIA, having playing in the men’s golf national championships two of the past three seasons.

“We compete pretty well across the Midwest and the national scene,” Ford said.

Before college golf, though, Bennett and his Tiger Cub teammates have a lot left to shoot for during the spring season.

Everyone returns from last year’s outstanding county, Western Indiana Conference and sectional championship squad and the Cubs have even higher goals this year.

“We have won the sectional two years in a row,” he said. “I know all the teams, who’ve they lost and who they’re gaining. I think we have a really good chance to win county, conference, sectionals, going undefeated and placing in the top three at the regional to qualify for the state finals.”

Bennett has not yet decided on a field of study at Marian, but he is glad to be able to put the college decision topic out of his mind.

“I wanted to get signed somewhere before our school season so I wouldn’t have to worry about it during the season,” he said.