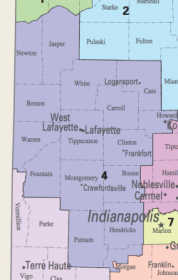 With Congressman Todd Rokita embroiled in a heated race for U.S. Senate, candidates for his Fourth District seat are lining up on both sides of the aisle.

Four Democrats and four Republicans have officially declared their candidacy with the Indiana Secretary of State’s Office.

Democrats Tobi Beck of Avon, Roger D. Day, Joseph W. Mackey of Lafayette and Veronikka M. Ziol of DeMotte have all officially declared their candidacies and will appear on Democratic ballot in the May 8 primary.

Beck and Mackey announced their candidacies during 2017 and have already campaigned in Putnam County.

Day sought the Democrat nod in 2014, finishing second to nominee John Dale, who went on to lose to Rokita in the General Election.

Sherry Shipley of Lafayette had previously expressed her intent to seek the Democrat nod in the Fourth District, but has announced instead that she will seek the District 22 seat in and Indiana State Senate, serving Tippecanoe County.

On the Republican side, familiar face Jim Baird is seeking the nomination. The former Putnam County commissioner is currently completing his fourth term as the District 44 state representative.

Besides Baird, Steve Braun of Zionsville, Kevin Grant of West Lafayette and Tim Radice of Lafayette have officially declared on the Republican side.

Grant finished second to Rokita for the Republican nod in both the 2014 and 2016 primaries.

At least two other Republicans have announced their candidacies, but had not officially entered the race as of Wednesday evening, according to information from the Secretary of State’s Office.

The additional GOP candidates include Diego Morales of Whitestown and Jared Thomas of West Lafayette.

Candidates have until noon on Friday, Feb. 9 to file their declaration of candidacy (form CAN-2) with the Secretary of State or the Indiana Election Division.

Further information can be found by calling the Election Division at 317-232-3939, or visitingwww.in.gov/elections.