In about one hour’s time on Tuesday, 35-year-old Emory Stout is alleged to have unsuccessfully attempted to rob a Morgan County bank before robbing the Cloverdale bank and then leading Owen County deputies on a chase that ended with his arrest near Spencer. 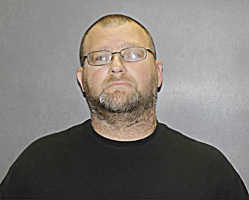 For all this, Stout has been formally charged with five felonies and a misdemeanor. If found guilty on all counts, Stout could face more than 23 years behind bars.

The string of incidents began around 1 p.m. Tuesday when employees of Peoples State Bank in Paragon observed a masked individual in a blue Dodge pickup attempt to gain entry to the bank.

However, the bank closes at 1 p.m. for lunch, so the individual could not gain entry, instead leaving the scene southbound on State Road 67 in the pickup.

Around 1:30 p.m., a man entered First National Bank at 302 S. Main St., Cloverdale, wearing a dark-colored hoodie, a cloth mask that was described by witnesses as a skull as well as “Cat” gloves and jeans.

The man approached the counter and told the clerk to give him all the money, handing the clerk a Walmart bag.

He then left the bank in a blue four-dour pickup, with a witness saying the truck headed south on U.S. 231 toward Owen County.

Putnam County sheriff’s deputies arrived within one minute of the 1:34 p.m. dispatch, gathered information and quickly sent out a description of the truck.

At 1:48 p.m., Owen County deputies spotted a similar vehicle southbound at U.S. 231 and SR 67. The vehicle accelerated away from them toward Spencer and a chase commenced, with the truck accelerating to speeds in excess of 100 mph.

During the chase, deputies were able to deploy tire deflation devices and puncture the passenger side tires of the vehicle.

The chase ended about 10 minutes after it began, with Stout losing control of the vehicle near the intersection of River Road and Pottersville Road.

After the vehicle stopped, Stout was taken into custody without further incident.

Following his arrest, Stout was transported to the Owen County Jail, while his truck was taken to the Putnam County Jail.

PCSD Det. Pat McFadden executed a search warrant on the truck, finding in it a cloth mask, “CAT” gloves, hooded coat and Walmart bag with banded stacks of cash.

McFadden noted, “the mask and gloves bore a striking resemblance” to those found in the surveillance video. Additionally, the Walmart bag fit the description given by the teller.

Likewise, the veteran detective noted that the truck also looked like the one in a different surveillance video, complete with not having a license plate on the back. An Arizona plate was found in the back seat.

Meanwhile, Det. Dan Downing of the Morgan County Sheriff’s Department interviewed Stout on Tuesday evening, during which time Stout confessed to both the attempted robbery in Paragon and the robbery in Cloverdale.

According to court documents, Stout explained that he suffered from PTSD following his time in the U.S. Army and that the family struggles to make ends meet.

Downing said that Stout told him he visited with his father that morning before deciding to go to the bank in Paragon and “get some money.” Asked what he meant by this, Stout told Downing “go in and demand money or rob the bank.”

Stout went on to describe the incidents that transpired in a manner consistent with those of witnesses at the scene.

“Mr Stout was very apologetic, thorughout the entire interview, as well as prior to the interview taking place,” Downing wrote. “Mr. Stout stated on numerous occasions that he did not mean to hurt anyone and did not make any threats toward anyone.”

It is worth noting that none of Stout’s charges are for armed robbery, and that weapons are not believed to have played a part in any of the incdents.

Stout made his initial appearance in Owen Circuit Court on Thursday, entering a not-guilty plea. Bond was set at $100,000.

He remains in the custody of the Owen County Sheriff’s Department and it is unclear when he will make court appearances in Putnam or Morgan counties, although each county has a hold for him.

Level 5 felonies carry a sentencing range of one to six years in prison, while Level 6 felonies come with a sentence of six months to 2-1/2 years. Class C misdemeanors are punishable by up to 60 days.