Moore passes 2,000 as Clovers get by Knights 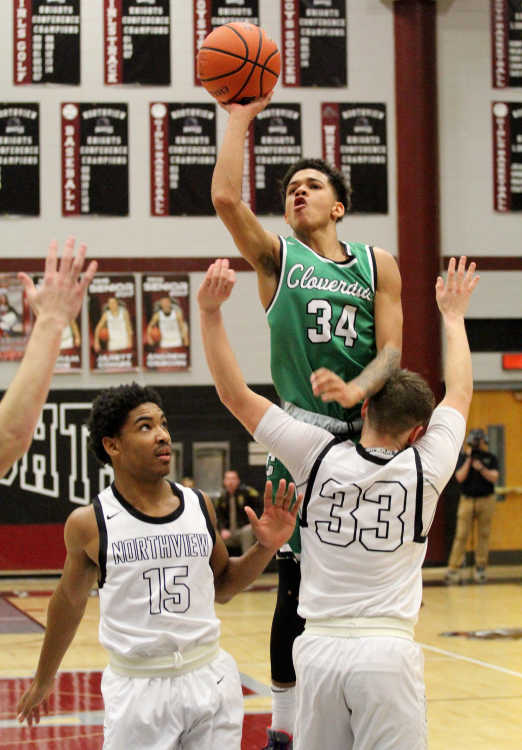 Cloverdale's Jalen Moore elevates for a floater during the first half of Friday's win over Northview. Moore scored 42 points for the Clovers.
Carey Fox photo

BRAZIL Ś There were plenty of fireworks on the court Friday night as Cloverdale came calling to Northview in the Western Indiana Conferenceĺs fifth-place crossover game.

The Cloversĺ Jalen Moore, the stateĺs leading scorer this year, etched his name in the record books with his 2,000th career point with a free throw in the third quarter. Meanwhile Northview senior Brigham Booe battled the Clover senior nearly point for point as the Knights fell just short in a 76-68 Cloverdale victory. Booe finished with 34 points in the loss as Moore tallied 42 points for the Clovers.

Northview head coach Michael Byrum was complimentary of both players after the high-scoring contest.

ôOffensively those two guys are probably two of the best in the area,ö Byrum said of Booe and Moore. ôIt was kind of a shootout.ö

ôWhat is amazing is that they were in back-to-back years. They played on the same team and started with each other for three years,ö Rady said of Moore and Neese.

The Clovers opened up a seven-point halftime advantage, 41-34, based on some hot perimeter shooting.

While Northview was cleaning up on the offensive glass to pile up 20 second-quarter points. The Clovers knocked down 6-of-12 from 3-point range in the first half. The Knights held a 21-8 edge on the first-half boards as Cade Bryan scored six second-quarter points and Booe had 10 in the period. Moore also got rolling in the quarter with 10 of his first-half points at halftime.

Cloverdale was able to extend its lead to 43-36 to start the third period as Jake Wilkes scored off a steal and lay-in.

However, it was the Knights that came roaring right back.

Booe drilled a 3-pointer and Carson Gettle followed with another from the perimeter. A second 3-pointer by Booe put the Knights on top 45-43. Booe added a steal and a lay-in to complete a quick 12-0 for a 47-43 lead at the 4:40 mark of the third quarter.

ôNorthview, I wouldnĺt want to draw that team in the sectional,ö Rady said. ôI think Coach Byrum does a good job. I think they are versatile offensively. I think they do a good job of screening and cutting and playing off of Booe, who is a tremendous player. Talk about a competitor. He is out there to win the game and you have to love that and getting to play with him or get to coach someone like him. I can see why he has been on teams that have won championships.ö 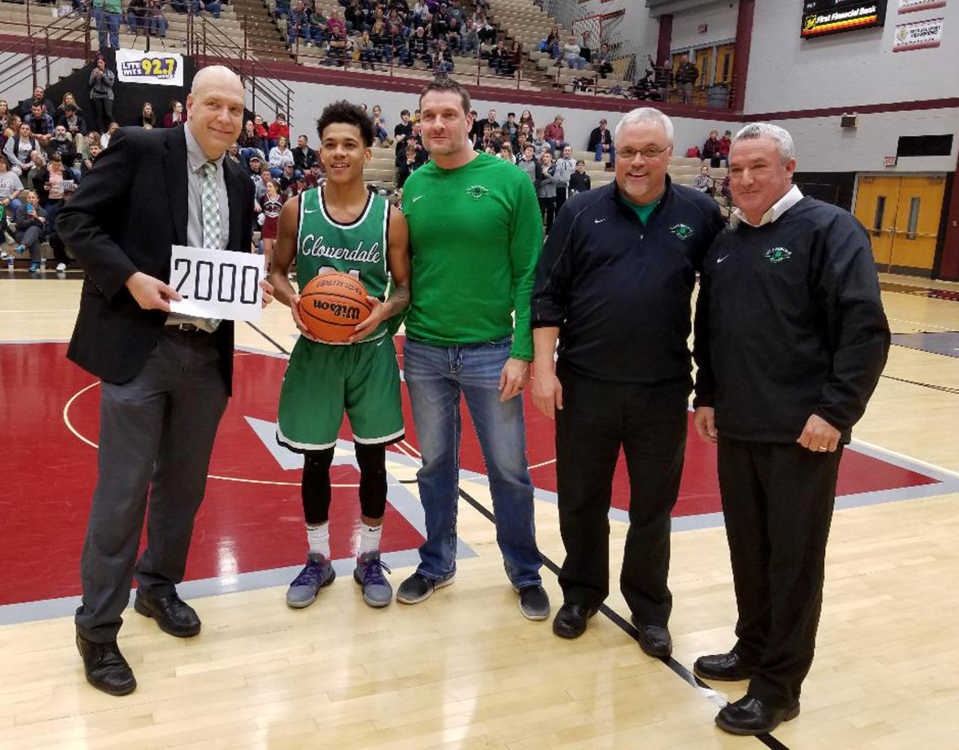 Moore, who needed 21 points to reach his milestone, completed a three-point play to get within two points of the mark. Gettle followed with a 3-pointer on his way to a 12-point effort. Moore drew a foul late in the quarter and knocked down a pair of free throws to reach the rare mark that just 50 players in Indiana history have achieved.

ôI think it is a testament to his work ethic. Jalen is one that continually wants to improve. I donĺt know if I have ever been around a player, who wants to get better as much as he does. He watches himself on video. He asks for drills in the offseason,ö Rady said. ôThe IHSAA gives you three days a week that you can come in and he wants to get those three days in each week. You see the product of unseen hours.ö

Byrum agreed that Moore has had a special career at Cloverdale.

ôCongratulations to him. He has been a great player all four years of his high school career,ö Byrum said. ôHe will go off and do great things once he decides where he wants to go to college.ö

Moore would score the final eight points of the quarter to give Cloverdale a 56-50 advantage.

Moore and Cade Bryan would trade points before a bucket by Winders. Northview would close to within 62-59 on a drive by Booe. However, Wilkes dropped home a 3-pointer and Moore followed a Knightsĺ miss with a trey and a 68-59 Cloverdale lead.

Northview clawed back within 71-68 on a score by Bryan with 1:30 remaining, but couldnĺt get over the hump.

ôIt seemed like every time that we got close we would miss a shot or turn the ball over or we would foul (Cloverdale). It was always one of those three things,ö Byrum said.

A Northview miss led to a pair of free throws by Moore with 34 seconds left and the Cloverdale senior sealed the deal with a 3-point play.

ôWe were hemorrhaging points. I thought we did a good job once (Northview) went up four points of containing them and getting stops,ö Rady said. ôThere was a stretch there that we allowed some drives and uncontested shots, but we were able to get in the double bonus and get some fouls called and get to the free throw line.ö

Bryan had 13 points and six rebounds for Northview with the Clovers getting 14 points and 10 boards from Wilkes.Winders added 10 points.