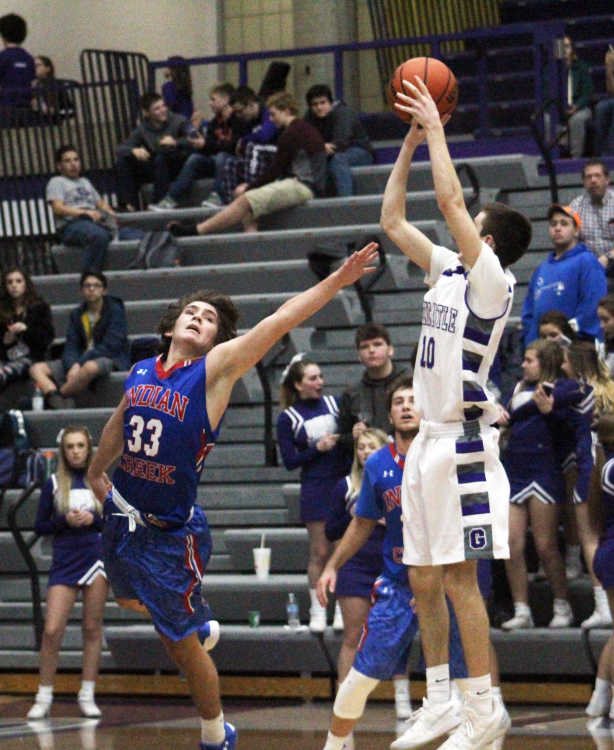 Indian Creek came to Greencastle’s McAnally Center on Friday night as the second-highest scoring team in the Western Indiana Conference at 61 points per game, trailing only Cloverdale.

The Clovers hung 80 points on the Cubs earlier this season, but coach Bryce Rector’s squad turned up its defense several notches and held the Braves 20 points below their average in recording a 43-41 win.

With the victory, Greencastle claimed third place in the WIC standings.

York and Indian Creek’s Jared DeHart are two of the WIC’s top players, and defended each other well. York finished with a game-high 18 points, while DeHart had 15 on just 6 of 17 shooting.

While the top players basically negated each other, Greencastle had the defensive wild card in junior big man Gavin Bollman.

Well-known for his defensive prowess as an all-state lineman for the Tiger Cub football team, Bollman controlled the paint area and blocked or affected numerous shots.

“Gavin is an impact player on the defensive end,” said Rector, whose team won its seventh straight game to improve to 10-4 on the season. “When he’s that good on the defensive end, we’re hard to beat. His presence off the ball makes a big difference in their paint, and on the perimeter, really helps us.”

No individual play was bigger than the last one of the game, though.

York hit a free throw with four seconds left to put Greencastle up 43-41, and the Braves were out of timeouts.

With the prospect of a last-second shot, or a foul and possible free throws, Bollman took off from midcourt as the in-bounds pass was in the air and snagged the ball — dribbling to his own baseline to allow time to expire.

The largest lead in the game was seven, and the evenly-matched teams played to a tight opening quarter.

York hit a trey at the buzzer from the top of the key to give his team a 10-8 lead at the first stop, on only his second shot of the period.

DeHart scored three baskets for Indian Creek in the second quarter, but a pair of treys from freshman sharpshooter Bennie Parmley helped the Cubs hold onto a narrow 18-16 halftime lead.

Parmley finished with three treys on the night in six attempts.

“This is another game when he stepped up and hit big shots,” Rector said. “He stepped up with great confidence, and his teammates have confidence in him.”

The Braves took control in the third period, with DeHart hitting a pair of treys and Zach Pugh adding another. DeHart’s second trey came with 1:27 left in the period to break a 28-28 tie.

Dalton Pruitt added another trey for the visitors with 24 seconds left in the period to extend their lead to 33-28 at the final stop.

Pruitt then hit a basket 20 seconds into the final period for a 35-28 advantage.

The Cubs had saved enough energy in the hard-fought game for one last run, and reeled off 11 straight points to take control.

Trey Wood took a pass from York for a layup to start the barrage, and York then connected on a trey before assisting to Bollman for a layup.

Bollman added another basket and York hit a pair of free throws to put the Cubs up 39-35 with :49.3 left.

“We talk about having mental toughness,” Rector said. “They went on a run at the end of the third quarter into the fourth quarter, and we responded to their run very well. I couldn’t be happier with our mental toughness.

“This is a game earlier in the year that this team might not have been able to win.”

Still, it was far from over.

DeHart took a jump shot from the baseline with 11.3 seconds left looking to tie the game, but was off target and Bollman hauled in the rebound.

The 6-5 big man calmly stepped to the line and drained both free throws for a 42-38 lead.

Pugh hit a trey with 5.1 seconds left to cut the deficit to the eventual final score, and the Braves then quickly fouled York.

York missed the first of the two shots but made the second, setting the stage for Bollman’s big defensive play.

“We held them scoreless for a good majority of the fourth quarter,” said Rector, whose team allowed a basket 20 seconds into the final period and not another until 38.8 seconds to play. “I’m very happy with our defensive effort.”

Bollman had 10 points and 15 rebounds for the Cubs, while Parmley added nine points.

DeHart finished with 15, and was the only Brave in double figures.

Greencastle’s celebratory period will be short-lived, as the Cubs travel to Tri-West tonight to meet a 12-2 Bruins team that has won six straight games itself.

“It gets no easier,” Rector said. “They have two really solid players in [Tyler] Watson and [Logan] Blake. We saw some things in this game that we will see again tonight, like great defensive pressure, and we’ll prepare for that.

“Above all else, you have to come out and compete.”

Rector’s team has turned the corner in just his second season, and he likes the direction things are heading.

“We are trying to create a culture of winning here, and you have to win games like this to say you have a winning culture,” he said. “It’s definitely much more fun when you win.