Richard Fitzwater, 82, of Bainbridge, passed away at his home on Wednesday, Jan. 31, 2018, surrounded by family. 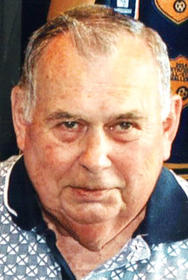 He was born in Lebanon on July 19, 1935 to Orville and Stella Eggers Fitzwater.

He was a graduate of Bainbridge High School, Class of 1954.

He farmed as well as working for West Baking Co. 15 years, then at Indianapolis Power & Light 26 years, retiring from IPL in 1998.

He was preceded in death by his parents and brother Jim Fitzwater.

Funeral services will be conducted at 1 p.m. on Saturday, Feb. 3 at Calvary Chapel, 2165 E. Main St., Danville, with his nephew, Pastor Roger Stroup, officiating. The calling will be from 11 a.m. until time of service.

Burial will be at Bainbridge Cemetery following the service.

Baker Funeral Home, Danville, is assisting with arrangements. Online condolences may be made at www.bakerfuneralservice.com.