Eagles hold on for win at Rockville 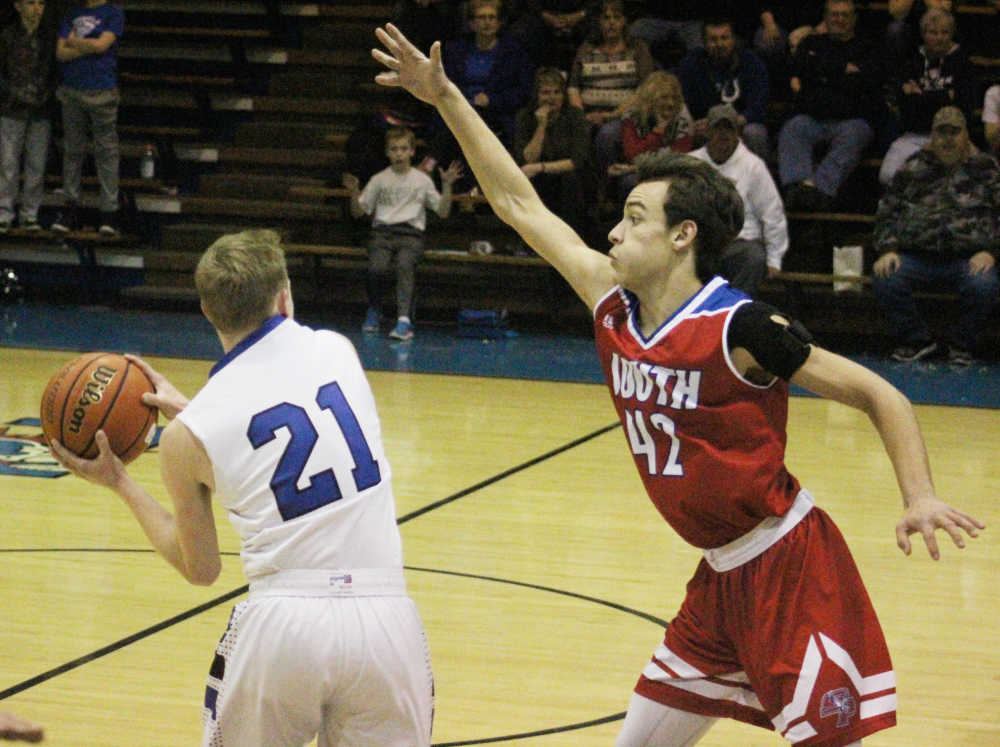 Clinging to a 57-54 lead with 1:16 left, leading scorer Allen Plunkett was called for a blocking foul that was his fifth of the game. Rockville’s Landon Newnum hit both free throws, and the Eagles had just a one-point lead.

The Eagles didn’t falter, however, with point guard Thomas Fanning directing the show against Rockville’s trapping defense. South Putnam was fouled three times in the final 39.2 seconds and hit all six free throws — four by Dalton Scott and two from Austin Arnold — to seal the win.

“That was big for us to finish one out,” South Putnam coach Greg Dean said. “We knew Rockville was going to come battling back, because that’s the kind of kids they are and the way coach [Rich] Schelsky is. I’m just proud of our guys for having some poise and closing it out.

“Our communication in the huddle was as good as it’s been all year,” Dean added. “I thought they did a really good job up and down the line.”

Rockville led 4-0 early before Plunkett hit a trey and then assisted on baskets by Kain Gregory and Lane Watson. A Scott trey with 31 seconds left in the quarter looked to give the Eagles a 12-10 lead at the first stop, but Plunkett unwisely fouled Newnum at the buzzer on a halfcourt shot. Newnum hit all three free throws to put the Rox up 13-12.

South Putnam dominated the second quarter, with Plunkett getting a basket plus a free throw 1:16 into the second period before Newnum hit consecutive hoops to put his team back ahead.

The Eagles held onto a slim lead until a 7-0 run late in the half. Scott started the streak with a trey, and Wes Lesko hit back-to-back baskets underneath for a 31-20 edge.

Rockville’s Logan White hit a shot at the buzzer for a 31-22 halftime lead for South Putnam.

Scott hit another trey and Thomas Fanning added a pair from long distance, as the Eagles edged their lead up to 48-38 at the final stop. Newnum hit a trey at the buzzer to cut into a 13-point lead.

Plunkett opened the final period with a basket and a trey for the Eagles, but picked up his fourth foul with 5:52 left as Newnum hit a basket and added a free throw.

That sequence cut the South Putnam lead to 53-45, and sent Plunkett to the bench for nearly three minutes. When he returned, the Eagles still led 57-52.

Rockville got a basket from Garrett Nichols with 2:26 to play to cut the lead to 57-54, before Newnum’s free throws and Plunkett’s exit from the game.

Plunkett paced South Putnam with 21 points, adding nine rebounds and four assists. Scott was close behind with 20 points, hitting 4 of 8 from long range and 6 of 7 free throws.

The Eagles got 22 other points from Fanning, Gregory, Watson, Lesko and Arnold as the Eagles had their second-highest scoring output of the season (behind 77 points against Eminence). South Putnam also scored 17 points over its season average per game.

“I don’t know exactly what it was,” Dean admitted. “I think they felt good about stuff, and we had a pretty good week or so of practice. Playing some good offensive basketball against Bloomington Lighthouse got us going.”

Newnum had 22 points for Rockville, approximately his season average, on 7 of 17 shooting. Dean was happy with the job done defensively on the top Rox scorer.

“He’s a really good player and he’s going to get his points,” he said. “But we made him work for them. We had three guys guard him [Gregory, Arnold and Watson] and they all did a great job of trying to hold him down. They can get points in a hurry.”

The Eagles are now 8-10 on the season, and Dean thinks they are heading in the right direction going into next week’s county tournament.

“We always want to peak in February and March, and that’s what we’re trying to do,” he said. “We get a week to get ready for the county tournament, and we’re looking forward to it. I think it’s wide open, and it should be a good county tournament.”

The tourney begins on Thursday with North Putnam meeting Cloverdale, followed by South Putnam against Greencastle. The consolation and finals are Friday night.